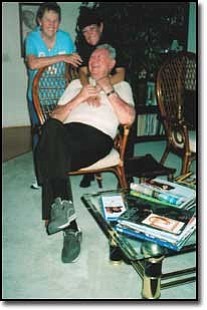 MEADVIEW ­ William Phebus got an unexpected surprise about three weeks ago when he learned he would receive a special tribute at Veterans of Foreign Wars Post 11018.

Phebus served as judge advocate at the post for two years. He now is simply a member and the only one who served in World War II.

Phebus was a fighter pilot in the European theater during the war. He was assigned to the 514th fighter squadron of the 406th fighter group, which was part of the 9th Air Force.

He flew the P-47 Thunderbolt.

"We started out based in England before D-Day," Phebus said. "After D-Day in August 1944, our forces had secured enough ground to be able to make some runways and we moved across the English Channel into France and were based there.

"We flew in direct support of Gen. George Patton and his 3rd Army. We were Army Air Corps attached to the Army and as such Gen. Patton was our commander. He called the shots where he wanted us to be and we preceded him all the way across France clear to the German border to open the way for dive, skip and napalm bombing and rocket attacks on Germany. It was all low-level air to ground work."

He received a Distinguished Flying Cross, along with an air medal with 12 oak leaf clusters, Phebus said. Each cluster was a separate medal.

Phebus also received a European Theater of Operations Medal with four battle stars, each representing participation in a different campaign. They recognized his service for D-Day, the Battle of the Bulge, Normandy invasion and Southern France Campaign.

He was a member of the 514th for 10 months. In all, he put in three years on active duty and nine years in the reserves, Phebus said.

Phebus later spent 12 years as regional vice president of Home Savings & Loan in Los Angeles. He also worked for shorter periods of time for three other savings & loans prior to retiring in 1989.

Allsman could not be reached for comment about the tribute to Phebus.

"It came as a complete surprise and is certainly something to be proud of."