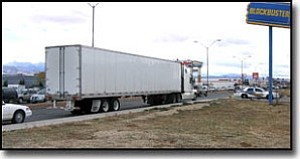 LORIN McLAIN/ Miner<br> The trailer of this semi crossed over the hood of a chevy pick-up during an accident at the intersection of Airway and Stockton Hill Road Wednesday morning.

KINGMAN – A semi-truck driving over a Phoenix-bound pickup Wednesday morning was already the fourth accident of the day in Kingman’s Bermuda Triangle for traffic accidents.

The semi, out of California, was turning left off of Airway Avenue onto Stockton Hill Road around 10 a.m. when the trailer portion crossed over the hood of a 1995 Chevy pickup waiting at the intersection heading northbound on Stockton Hill Road, according to Kingman Police Traffic Officer Evan Kunert.

Kunert said the accident, where the semi driver was cited for Improper Turning Position, followed three accidents in the previous couple of hours, two of which were a few blocks south in front of Alfonso’s Mexican Food.

Those two accidents were both rear-end collisions, one of which was a hit-and-run, where the driver at fault fled the scene, leaving little identification for police to go on, Kunert said.

The first accident Wednesday was another rear-ender, that one at the corner of Harrison and Van Marter, he added.

“I’d say that the vast majority are rear-enders,” Kunert said, adding that the frequency of accidents is symptomatic of traffic flow.

Kunert said about 20 percent of the city’s accidents occur at the intersection of Airway and Stockton Hill Road.

The intersection had the most accidents in March with six, department information shows.

The second-rated hotspot was Harrison and Beverly, where five accidents occurred.

Kunert attributes the majority of accidents to lack of awareness. He said common responses from drivers were that they were looking away, had dropped their phone or were changing radio stations.

“This area will continue to be the worst until people increase their awareness in their driving,” he said.