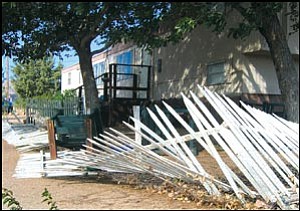 The fence in front of Rebecca Truair’s house was damaged by the wind Wednesday.

Rebecca Truair, who lives in the 4100 block of Mazatzal Drive, described the windy storm as the worst one she has experienced since she moved to the area six years ago.

"The house was shaking. I could see nothing through my window because of the rain. It just looked like someone set a hose in front of our windows," Truair said on Thursday.

She heard a loud blasting sound from time to time in the vicinity during the storm, but she said she had no idea what it was.

When the weather cleared, she found that a section of a 5-foot-high wooden fence on her property had blown down.

A smaller fence built around a garden in front of her house was also damaged. Several 30-pound wooden chairs were moved by the winds.

Truair built those fences together with her husband several years ago and expected them to last longer than they did.

The big fence cost them $3,000, the smaller several hundred, plus labor, she said.

Truair did purchase property insurance, but she is not sure whether the fences would be counted as insured items.

She called the insurance company several times on Thursday, but no one had returned her call.

During the storm, Truair and her husband heard something hitting the roof, but they have not checked the roof to see what it was because of her husband's health problems.

"Neither of us is healthy enough to climb up. We just pray everything will be fine," Truair said.

Aurora Jensen, who lives next door, said she thinks it was a tornado.

She saw a black cloud form in the northeast corner of Golden Valley and watched it jump around toward her neighborhood.

The wind broke several windows in her house from different directions and blew down a fence on the east side of her property.

Several properties to the west of Truair's house were also hit hard by the strong wind. Broken windows and downed fences could be seen along Mazatzal Drive. Two trailer homes inside a property could be seen with part of their roofs torn off.

Jensen said owners of those properties do not live in the area on a regular basis, so they may not have learned about what happened in the neighborhood.