Fire districts one step away from merger 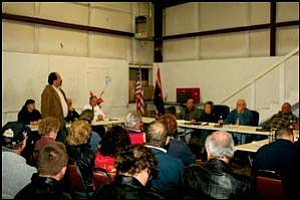 Porter Williams, a resident in the Hualapai Valley Fire District, addresses the board. Photo: Courtesy

Once again, there were more than 70 people gathered to discuss and listen to what others had to say about the merger, but the scene was a lot more tranquil at the second public hearing held in the HVFD fire station.

Hualapai Valley Fire Chief Wayne L. Eder spoke about the benefits of the merger. They included a four- to five-minute reduced response time due to combined dispatch, reduced overhead due to elimination of a fire chief and board members, lower insurance resulting from a lower ISO rating for Valle Vista and a reduced tax levy. Eder added that equipment and training would be standardized at all fire stations.

Eder also spoke of a proposed fire station located between both districts paid for by community developers. He said the combined districts would increase staff based off of upcoming projected budgets.

The majority of the individuals who spoke at the public hearing expressed their desire to prevent the merger, or at the very least, have a public vote.

Many said that they didn't feel the merger would benefit the HVFD at all.

Jason Scott, a paramedic with the HVFD, said he and other current firefighters in the district support the merger.

HVFD board member Edward Schrum addressed the public following their call for a halt to the merger.

"What I'm saying is we're going to have to do it eventually," Schrum said. "There's been too much put into it."

Now the Valle Vista Fire District board must vote unanimously at their next meeting at 7 p.m. on Dec. 13 for the merger to happen. Anything less than a unanimous vote stops the merger completely.

The board has already unanimously approved the merger, saying it will promote public health, comfort, convenience, necessity or welfare in the best interest of the VVFD. The next meeting will take place at the Valle Vista Country Club, 9686 Concho Drive.

The combined board would then decide the name of the new fire district and who the chief would be.