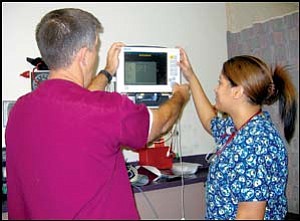 "Our patient satisfaction level is at the 85th percentile rate over the last two quarters," said Dr. Michael Ward, medical director of the ER. "It was in the 40th percentile prior to July 2006.

"We have a proactive team of doctors and nurses working together.

"One or two people will not succeed unless everyone buys in to what we're doing."

In April 2004, emergency room walk-in patients waited an average of 110 minutes before being seen by a doctor, Ward said.

As of November 2006, that time had fallen to 35 minutes, according to Ward.

In addition, the time spent at the emergency room from arrival to discharge for those patients not admitted was in excess of five hours in April 2004.

That "turnaround" time was down to 2 hours, 40 minutes on average as of last month, Ward said.

Ward is a member of the Arizona National Guard. He said his military background has enabled him to develop leadership skills and motivate people.

The different nursing units (ICU, PCU, etc.) within the hospital have given the emergency room an Outstanding Patient Care Award in view of the significant improvements, said Janet Gode, a registered nurse and director of emergency services in the ER.

In July, KRMC contracted for emergency room physician services with Ward's group, Arizona Emergency Medicine Specialists. The hospital offered incentives if the group could find ways to shorten patient waiting times, reduce their needs before being seen by a doctor and improve patient satisfaction levels.

"When I started here in August 2004, we did not have a full contingent of local doctors," Ward said. "It wasn't until July 2005 that we had a full-time physician staff and could begin making some changes.

"The first thing we decided was that any time we had an open bed , we should not make a patient wait to be triaged. We put that patient in the bed and triaged him or her there."

The team approach to emergency medicine moved patients out of the waiting room faster and into beds. In turn, that enabled "protocol" tests such as lab work, EKGs and X-rays to be performed quicker, so the doctor had key information in hand when seeing the patient.

"With computerized tracking, we can monitor how quickly patients are seen," Gode said.

"We've worked on each piece over the past 2-1/2 years. The goal is how quickly you can see a doctor."