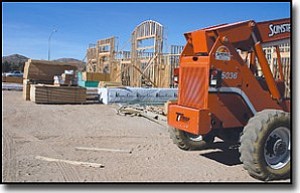 JC AMBERLYN/Miner<br> Construction of new homes and businesses, such as this one along Stockton Hill Road and Mullen Avenue, continues at a brisk pace.

KINGMAN – The past year proved to be the busiest year for local residential builders, and commercial buildings also kept growing at a stable pace.

Jim McErlean, senior building inspector at the city Building Department, said the sharp increase can be largely attributed to the strong growth of local economy and population.

“With more people moving in, you definitely need to build more houses,” he said. The new subdivisions that have come into the city of Kingman in the past two or three years also help prepare for additional growth, he added.

To facilitate the inspection and evaluation of new houses, the Building Department introduced a new policy last year. New buildings, if constructed together with the same styles, only need to be inspected once. The measure, McErlean said, was especially beneficial to developers who build dozens of new houses in the same areas. Besides less inspection, developers could also get a special discount for such group buildings.

The policy benefits the Building Department, too. With only 10 full-time staff, the department has to work around the clock to get jobs done on time. During some peak months, like last March and May when the department issued more than 100 permits a month, they had to outsource the inspection work to some professional companies from Phoenix.

With continued growth in the local building market expected, the department has begun to consider adding new staff to the inspection team.

The need could become urgent in the next couple of months if several developers from Las Vegas ink the deal to build hundreds of new houses in Kingman. “If hundreds of permit applications come at once, we could become busy rapidly,” McErlean said. Even with existing staff, the office is already a little cramped. The city is considering moving the department into a much larger building in the months to come.

The increase in the number of building permits issued has been steady in the past five years, and each year the growth was in the double-digits. The only fluctuation appeared in June, when a higher inspection fee was introduced. The number of building permits fell to 46 in June from 125 in May. But the applications soon recovered to 109 in September when the impact of the fee increase gradually became less of a factor.

Based on the figures in the past, McErlean said the building market should keep growing if the county and city’s overall economy perform well in the years to come. But all in all, it’s something his department rarely decides. “The Building Department is only there to support those things and get building permits going when there is a need,” he said.