Elections Department counts up the votes 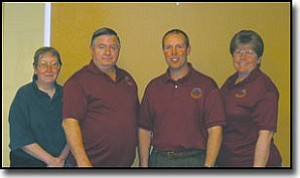 KINGMAN – The Mohave County Elections Department is a fundamental extension of the Board of Supervisors satisfying the duties required for election administration. The department’s main goal, according to Director Allen Tempert, is to ensure that the elections that go through his department run smoothly and accurately.

Tempert said the there are four consolidated election dates throughout the year: the second Tuesday in March, the third Tuesday in May, eight weeks prior to the general election (September) and the first Tuesday after the first Monday in November.

A presidential election year is the only time there are five election dates because the presidential preference election falls in February. This election, which is not held in all states but is in Arizona, allows citizens to choose which candidate they want running for a particular party.

Tempert said that most jurisdictions hold elections on those dates, while the county’s election department is only required to hold state and federal elections.

All other elections, Tempert said, are contracted to the department. For those, the county handles most everything.

“When an issue arises in a city, such as the upcoming mayoral election, the city has a large part in it,” Tempert said.

The city, or other jurisdiction depending on the election type, is in charge of handing out petitions, receiving candidate petitions and verifying the signatures to a point (with the exceptions of candidate’s petitions which do not need to be verified). All items then come to the county.

The county, in turn, is a watchdog.

According to Tempert, the department watches the candidates’ deadlines for paperwork. They also notify the candidates if they are late in turning in their financial reports and issue the fines for that lateness.

Once all of the deadlines pass, the elections department jumps into gear to get the ballot ready. Tempert said they use an external company to have the ballots programmed and printed. The election database is also programmed to include all necessary information such as candidate information, any referendums, etc., that needs to be included on the ballot.

Once everything is programmed, Tempert said it is their job to ensure the accuracy and completeness of the ballots. When it is acknowledged that everything is true and correct, early ballots are delivered to voter registration and poll site ballots are added to the supplies for each voting precinct.

One of the biggest parts of getting ready for an election, Tempert said, is testing the ballot with the counting equipment. The database is tested for correctness by performing a logic and accuracy test. This ensures that what is chosen on the ballots is what is counted in the database.

Tempert said he uses the exact machines that will be at the different poll sites for the tests. Everything is made exactly as it would be on election night so that the machines and the memory cards are the ones that will be used in the actual counting.

A random set of ballots is used in which Tempert and his staff mark test ballots to make sure that the count on the ballots matches the count the machines read. This is done several times to guarantee accuracy. He said he then uses the same test deck the night of the election to test the machine once before the final count to make sure that the read is still the same.

Quite possibly the largest task they do, according to Tempert, is the recruiting and training of poll workers. Due to the long hours and minimum pay, Tempert said there are few that are willing. In countywide elections, Tempert said they recruit upwards of 500 poll workers. For these elections, he said it takes about a week of two sessions a day to train them all. It is also an even bigger challenge, he said, to recruit bilingual poll workers for a growing diverse population.

Tempert said the elections department thoroughly trains poll workers on the rules and regulations associated with elections. They also provide all of the materials needed to process results and handle voters the day of the election. Each training course lasts about two hours.

Recruiting poll workers is the job of Elections Assistant Teri Hoke. Hoke is the front line when it comes to the election departments. She is the first person people see when they come into the office and the first person they hear when calling on the phone.

Hoke said she begins the recruiting process by contacting those who have worked in the past. If they are still short workers after that, she begins to check voter registration cards for people who marked that they were interested in being a poll worker. If they are still in need of more people, they will take out an ad in the local media, which has attracted varied response in the past.

In addition to answering phones and recruiting poll workers, Hoke is in charge of the accounts payable in the department. She also runs the mapping program for citizens wanting maps of voting precincts or districts. Hoke runs any additional tasks handed to her by the elections director.

Charlie Abernathy, the county’s Elections Tech, is another valued member of the Elections team. Abernathy is in charge of the election office warehouse. He prepares all of the supplies including ordering, packing and delivering them.

If they do not meet the requirements, he works on correcting the problem or finding another polling location for that precinct.

The final member of the team is a newcomer this year, Betty Vernon. Vernon, the Federal Compliance Officer, is a part-time worker in the department in charge of making sure the department is in compliance with the federal requirements of the Voting Rights Act. As the county grows and becomes more diverse, Tempert said it is important to have someone who makes sure that no ones rights are infringed upon. Tempert said she also offers general assistance in a multitude of other tasks.

Tempert, as the director, is the glue that holds things together. He said he has his hand in most of the things going on in his office. The other three are in charge of creating the puzzle pieces and putting them together, it is his job to ensure that the pieces are going in the right place to achieve the overall picture.

The Elections Department is located on the second floor of the County Administration Complex at 700 W. Beale St. For more information, call 753-0733.