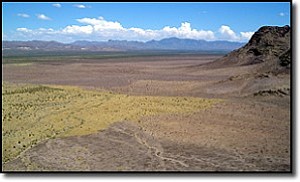 Courtesy<br> Arizona Game & Fish Habitat Program Manager Kevin Morgan took this aerial photo in the Black Mountains near Mt. Perkins during a wildlife survey last summer. The photo shows the impact fires have on an ecosystem where fire wasn’t a natural component.

KINGMAN – The regional wildfire season in 2005 may end up being the most destructive on record, but early reports indicate that 2006 may be worse.

The Southwest Coordination Center in Albuquerque predicts Arizona, New Mexico and West Texas will experience an above normal fire season this year.

“This will be characterized by an early and active season in all fuel regimes across most of the geographic area, with above normal potential for initial attack and large fire development,” the preliminary report states.

Fuels remaining from last winter’s unusually high rainfall and snow pack coupled with the weak monsoons in 2005 make the area susceptible to another intense fire season. The SCC forecasts an earlier and wetter monsoon season this year, but Arizona is still likely to see significant fire activity through July.

“We’re going to have a lot of desert fires,” said Wade Reaves, a fuels specialist with the Kingman Office of the Bureau of Land Management. “We were busy last year in the Black Mountains and Golden Valley area and we expect to have that again. On top of that, with it being so dry this winter, there will be more of a fire risk in the Hualapai Mountains and some of our other higher elevation areas. We’re going to have a lot more fire danger than we did going into last summer.”

In 2005, the BLM reported 179 fires torched 170,696 acres on lands administered by the Kingman and Phoenix offices. That’s three times the number of individual fires and nearly 19 times the average of 9,000 acres burned in a typical fire season.

Some areas of the country are already seeing above-normal wildfires. As of Jan. 9, more than 400,000 acres had burned across the southern plains states since the new year, normally a time of very low fire activity, according to the National Climatic Data Center.

Firefighters aren’t expected to receive any help from above either. The National Weather Service reported that drought conditions throughout the Southwest would continue, “at least through April, with a good chance that drought will further expand.”

“For the month of February, we’re still looking at below normal precipitation with above normal temperatures,” NWS meteorologist Charlie Schlott said. “We’ve had this ridge of high pressure over the Southwest pretty much all winter and expect it to continue that way, limiting any moisture feed into the desert Southwest. Pretty much into the spring, we’re expecting this pattern to continue.”

Mountain snow pack is less than 10 percent of normal in Arizona and New Mexico. Phoenix has reported no rain since Oct. 18.

The National Interagency Fire Center is still compiling the results from 2005. Preliminary estimates suggest that more than 8.53 million acres burned across the country through the end of December, eclipsing the record set in 2000 for acreage burned. Fires consumed more than 8.43 million acres during the 2000 fire season.

The total number of fires across the United States continued to decline in 2005. This fact, combined with the increase in acreage, suggests that the average size of individual fires has increased during the past 20 years, according to the NIFC.