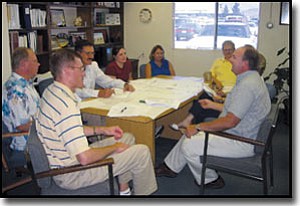 KINGMAN – The Mohave County Public Works Department, the largest department within the county, is in charge of the county-maintained infrastructure.

The mission of the Public Works Department, according to Director Mike Hendrix, is “to serve its citizens by delivering quality public works service with the efficient use of resources to enhance the lives of those served.”

According to Hendrix, each of the divisions has made several improvements around the county as well as improvements within their own departments.

The Engineering Division, which is overseen by Nick Hont, has managed over $18 million in road, drainage and waterline construction projects, Hendrix said.

Currently, he said, the division is managing $2 million in building construction and remodeling and about $1.5 million in professional services contracts.

The Roads Division, headed by Manuel Esquibel, maintains roughly about 2,000 miles of roads throughout the county.

In an effort to hard surface more roads more quickly, Hendrix said nearly 25 miles of dirt roads have received hard surfacing through a new soil stabilization test program. According to Hont, this program involves mixing a special soil stabilizer with about 4 inches of surface soil, which results in a glue-like substance. The crews then chip seal it, giving it the appearance and drivability of paved roads.

Stuart Lane heads the Surveying Division and received the 2006 Surveyor of the Year Award for Arizona from the State Board of Technical Registration. This division, Hendrix said, is currently in the process of “establishing the countywide geodetic control network necessary for the county GIS.”

The Traffic Control Division, in addition to maintaining over 3.4 million feet of centerline and edgeline stripe and 21,000 traffic control devices, are also the first-responders for emergency requests, Hendrix said. Headed by Fred Weyermiller, this division installs, maintains and administers the county’s ALERT Flood Warming System. This system, according to Hendrix, consists of 206 sensors at 62 sites that allow the county to stay ahead of potentially devastating flooding.

Due to the efforts made by this division, Hendrix said the county is only the second in Arizona with an approved Multi-Jurisdictional All Hazards Mitigation Plan approved by the Federal Emergency Management Agency. They have also prepared and equipped the county’s Emergency Operations Center in the Sheriff’s building for operations.