Doctors warn of cancer risk from sun as summer begins 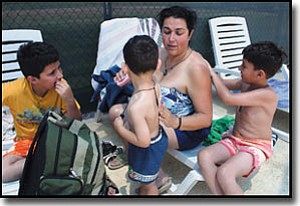 KINGMAN – Outdoor enthusiasts need to be aware of the dangers they face when engaging in their favorite activities, especially during the hotter months of summer.

Ultraviolet rays of the sun can cause melanoma, an invasive and often deadly form of skin cancer, said Dr. Barbara Harris-Feshami, a holistic family medicine practitioner.

“Skin damage may not manifest itself for 20 years, so sunburn you incurred as a child can lead to skin changes later in life,” she said.

“Melanoma can look benign initially and be missed. If you have molds or freckles, you should be checked by a doctor.

“Basal cell and squamous cell (cancers) are other concerns. Both occur on the nose, ears, arms and hands and stay localized for the most part so they can be removed by a doctor or dermatologist.”

Melanoma cancer tends to run in families. However, an individual is not necessarily safe if there is no family history of it, Harris-Feshami said.

“About 90 percent of the problems we see are skin cancer,” Barr said. “People as young as 15 are coming in with cancer of the face.

“The melanoma type of skin cancer is the most deadly, though we see non-melanomas more including basal cell and squamous cell. Those two rarely metastasize to the bones or liver and tend to sit where they are and be locally destructive.”

Protecting oneself from UV rays begins with application of sunscreen at least 30 minutes before going outdoors.

Barr recommends using one with a Sun Protection Factor of 30 or more. Sunscreens go up to 65 in their SPF, he said.

“I also suggest not going outside between 10 a.m. and 2 p.m., when the sun is nearly overhead and UV rays are coming straight through the ozone layer. In the early morning or late afternoon, sunrays penetrate at an angle, so the distance to reach the earth is longer.”

In addition, Barr recommends wearing a hat with a brim. Men often wear baseball caps and their ears “get trashed,” he said.

Anyone venturing outdoors in the daytime would be advised to carry water as well, Harris-Feshami said.

“People need to realize they still can get sunburn while wearing sunscreen,” Harris-Feshami said. “When buying sunscreen, be sure to read the label for its UVA and UVB factors. There are different types of UV light and some products only protect against one.

“Also don’t forget to apply it to your lips and ears.”

Caucasians are most susceptible to the harmful effects of UV rays, Barr said.

In general, any sunscreen product used should have a minimum SPF of 30 and be re-applied every few hours, as sweating takes it off, he said.

Harris-Feshami added one other caution concerning the “cosmetic effect” of sunlight.

“It causes more skin dryness, wrinkling and accelerates the aging process with the appearance of what some doctors call barnacles,” she said. “Seborrheic keratois are wart-like benign growths and are probably the most common benign tumors found in older people. One cause of them is sunburn as a child. People using tanning beds and being sun lovers may also wind up with them on their bodies.

“They may not harm you but nobody likes them. They can be surgically removed but tend to come back.”