KHS robotics team builds on past success in Phoenix 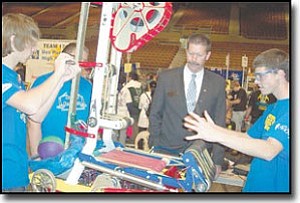 Courtesy<br> State Sen. Ron Gould gets an up-close look at the Kingman High School “Bionic Bulldog” robot in Phoenix, where the KHS Robotics Club competed in a regional event Thursday through Saturday.

KINGMAN – Kingman High School’s Robotics Club did not repeat as Engineering Inspiration Award winner last week during the 2006 U.S. FIRST (For Inspiration and Recognition of Science and Technology) Arizona Regional competition in Phoenix. However, team members are not singing the blues about it. They returned home as overall winners of the Arizona Regional event, which attracted 45 high schools from throughout the United States and Canada.

“We wanted to do well and compete for a Chairman’s Award, the most prestigious in Phoenix,” said junior Matt Yanez, a team member. “But I wouldn’t say we’re disappointed since there were a lot of good teams there.”

The Bionic Bulldogs won a Chairman’s Award at the Las Vegas Regional competition last year and will have a shot at duplicating the feat when they compete in that event at the University of Nevada – Las Vegas during the period of March 28-April 1.

KHS was the No. 14 seed after qualifying rounds. The top eight seeds choose two other teams to form “alliances” of three teams each for the event.

A Canadian team was the No. 3 seed and picked Kingman and a lower-seeded team from New Mexico for its alliance, Hardina said.

“We didn’t work well in practice Friday or Saturday,” Hardina said. “But in the last two matches, we worked out some bugs and snuck up on some people.”

KHS had to play nine matches the final day (Saturday). The Bionic Bulldogs alliance won two of three matches in the quarterfinals, semifinals and finals.

In the finals, KHS and its two alliance partners were up against an alliance that included a Las Vegas team calling itself “The High Rollers,” plus teams from Canada and California.

The Las Vegas team went into the quarterfinals with a 10-0 record and won four straight matches to reach the finals with a 14-0 record. The High Rollers also won the first match of the finals against KHS before the Bionic Bulldogs rebounded to take two in a row for the championship.

“Ryan Freiday and Kainin Hancock were our drivers, and Kainin said afterward, ‘We stepped up and spanked them,’” Hardina said.

Hardina said on paper Kingman had no chance to do well in the finals. But alliance members pulled together, came up with a plan and helped each other carry it out.

“Aim High” is the name of the game this year.

Two alliances, each comprised of three robots, try to gain control of 80 7-inch Nerf basketballs. One point is earned for each shot into a 3-foot-wide by 1-foot-high ramped goal at ground level on either side of an elevated goal. Three points are awarded for each ball shot into a 36-inch circular goal set eight feet off the ground.

There were a number of technical problems with the robot to overcome during the event.

“We had to replace motors that weren’t working well on the elevator that brings the ball up to the shooter and on the part that catches the balls,” Yanez said.

“We also had a wheel fall off twice, but the robot is built to keep going if it loses a wheel. We replaced the snap rings and kept going.”

Team members hope for another solid effort in Las Vegas, where “The High Rollers” again will compete. The question is will they be an alliance member with KHS or an opponent?