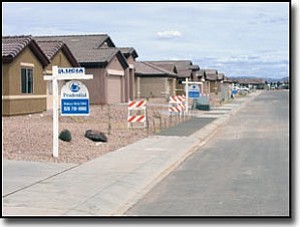 LORIN McLAIN/Miner<br> Homes for sale that were originally purchased the day they hit market in a Rhodes subdivision line Heather Street near the Vista Bella subdivision.

Stark contrast to the current market where hundreds of homes are waiting for bids and builders are slowing their pace to get rid of existing inventory.

Current listings for single-family homes number 635, of which 245 are new construction, according to Century 21 Realtor Cathy Ott.

“That’s a lot of homes for people to choose from,” she said.

“Last year, we sold before they were even started, that’s where the big difference is.”

Ott attributes the cool -down to simple supply and demand – heavy inventory and not as many buyers.

Ott said mortgage rates probably have little to do with the market, but rather not as many people seriously looking to buy at the moment.

Ott said though there are more listings, prices are up as well.

“I think you’ll see prices continually come down,” she said.

“Inventory is building, prices haven’t come down, but prices are being reduced for those that want to sell,” said Old Trails Realty owner Doug Dusharm.

Dusharm said he thinks as more homes list, prices will inevitably come down reflecting more of a buyers market, rather than the quick investments of the last two years, adding that there are actually more homes available than listed considering some homes independently sold by builders are not included in listings compiled for Realtors.

“The inventory we have on new construction is huge, probably larger than any inventory we’ve ever had in Kingman.”

Dusharm attributed some of the change to fewer investors playing the market. With prices of homes considerably up, investors aren’t able to recoup the expense from renting them.

Gary Lawson, owner of G.V. Lawson, Inc., said his company is slowing the pace compared to the rush of last year.

“We couldn’t keep up, we had people making offers at the framing stage,” Lawson said comparing the workload of last year.

“We’re not going to build any more specs until they start selling,” he said, adding that he currently has eight homes waiting to sell.

Lawson said rising land values are the largest factor to the price of homes, in addition to the city increasing fees and new impact fees.

Raw material costs have additionally gone up about 20 percent within the last two years, he added.

Building permits issued so far in 2006 reflect construction at less than half the rate of last year – 114 permits for single-family homes issued through March 24 this year compared to 246 for the same period in 2005.