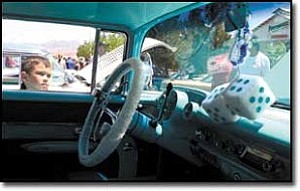 KINGMAN ­ The charm of more than 700 classic cars and historic Route 66 brought thousands of visitors to downtown Kingman Saturday for the 19th Annual Route 66 Fun Run.

"We belong to the Route 66 Association, and we have been here every year for at least 15 years," said Phil Grippaldi, a resident of Las Vegas. He brought his 1974 Buick convertible to the display.

Though there are several legs during the Fun Run, Grippaldi always chooses to stay in Kingman.

"It's a very nice town, very nice (and) friendly people, and the police always do a very good job," he said. He and his wife usually just sit behind his car and chat with visitors.

One special decoration that distinguishes his car from other classics is the two life-sized toy children standing in front of the super-length convertible. Visitors, especially those that bring their kids to the Fun Run, usually stand in front of his car for awhile.

Grippaldi is very satisfied with his idea.

"Back in the late 1990s, people used to put some (toy) children on the back seats of their convertibles, so I thought, 'Why don't I try something different,'" he said. From then on, Grippaldi has put two lifelike toy children in the front of his car, and this move, according to his wife Kathy, did bring them more attention.

"I call them time-out kids," Kathy said. She explained to people's queries that those two kids had their time-out punishment there because they behaved badly.

For Kathy, there is no better way to enjoy a spring weekend than being part of the Fun Run.

"Just sit down and have a good time, or walk around, buy some tea and then enjoy the evening," Kathy said.

For Kingman resident Richard Krug, his focus of the Fun Run has always been on showcasing his collection of well-maintained classic cars ­ a 1965 Ford Mustang, a 1967 Chevy SS and a 1967 Chevy Truck.

While visitors invariably comment on the cars' fancy exterior designs, he never forgets to remind them those cars are equipped with souped-up engines.

"Every car can look good from the outside, but it's the horsepower that sets them apart," he said, adding nothing but "muscle cars" can really touch his heart. He often cruises Route 66 with his muscle cars before the sunset and thinks of those good old days.

"It takes you back to those old days. You don't have to worry about people calling you up and stuff like that. It was always safe to go out to have a hamburger and a coke at night. That's the part I miss most," Krug said.

A few sections away from Krug's slots, Nelson Hill from Phoenix is also among those who cherish those good old days. As proof to his love of the past, he has kept and maintained his 1965 Mustang Coupe for more than 40 years.

"I brought it as new car and kept it though all those years," he said. For better driving comfort, he has rebuilt the engine and added a new air conditioning system, but the soul and heart of his car, he said, is always there.

He has brought his car to the Fun Run every year since 1994. Each year, he said, it seems there are more cars joining the Fun Run. But through all those changes, one thing he and his friend have been feeling comfortable with is the fact that the affection towards Route 66 and classic cars never changes. That is also the reason they come back year after year, Hill said.