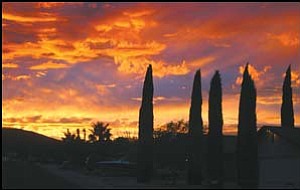 The sun has set on summer weather, with a series of low pressure systems in the forecast. Photo: JC AMERLYN/Miner

KINGMAN - Moderating temperatures over the past 10 days helped bring Kingman a shower Monday, although it was not enough to register in rain gauges operated by the Mohave County Department of Public Works.

"It looks like there's no short-term heat wave in sight for the next couple of weeks," said John Adair, a staff meteorologist with the National Weather Service in Las Vegas. "We're getting a series of low-pressure systems off the southern California coast that are rolling across Arizona."

Adair said the next chance of measurable rainfall for Kingman would be Friday night into Saturday, as another low-pressure system moves across the state. However, there is a 30-40 percent chance temperatures will be above normal next week.

"Between Oct. 17 and 23, it looks like you'll be getting above normal temperatures, perhaps climbing into the low 90s," said Randy Cerveny, professor of geography at Arizona State University.

"We've gotten into a fall pattern earlier than anticipated. We're getting a westerly wind flow instead of the usual southerly flow, and the result is we're seeing cooler temperatures with a chance of wintertime storms."

While gauges in Kingman did not reflect measurable rainfall from the noon hour shower Monday, gauges in Hackberry and Truxton to the northeast recorded amounts of .02-.04 inches. Morning clouds over the Hualapai Mountains delivered .04 inches of rain at the mountain's peak.

Kingman experienced slightly below normal average maximum and minimum temperatures of 87.5 and 57.9 degrees, respectively, in September. Normal averages are 88.1 and 60.8 degrees.

Rainfall in September was nearly double the normal, with 1.3 inches recorded at Kingman Airport vs. the usual amount of .73 inches. All of the precipitation fell during the period of Sept. 3-8. There was a trace reported Sept. 13.

"The long-term monthly forecast is for above-normal precipitation, and we're holding in a wintertime pattern," Cerveny said.

"A polar system is coming down from the northern Pacific (Ocean) into California and northern Arizona, likely due to a growing El Nino. It's a tad stronger than what we saw a month ago and affecting storm patterns. We should get a more northerly flow, which means colder and wetter air masses as opposed to drier air."

The Climate Prediction Center in Silver Spring, Md., projects above normal temperatures for the remainder of the calendar year, Adair said.

The ASU Office of Climatology states average maximum and minimum temperatures for Kingman during the last quarter are as follows: October 77.2 and 49.9; November 63.7 and 38.7, December 54.8 and 31.8. Normal precipitation amounts are .76 inches in October, .74 for November and .94 in December.

"The Climate Prediction Center says to expect above-normal precipitation and temperatures through next March, but I have my doubts," Cerveny said.

"If we get that many storms, it will promote cloud cover and make it cooler. If rain comes at night, it will hold temperatures up.