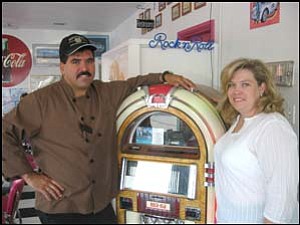 Armando and Michelle Jimenez had an unexpected guest at Mr. D’z Route 66 Diner in May. Talk show host Oprah Winfrey stopped in with her friend Gayle King for lunch. The diner will be featured on the Oprah Winfrey Show Monday afternoon.

KINGMAN - Owners Armando and Michelle Jimenez are used to unusual guests at Mr. D'z Route 66 Diner. They've had film crews from travel shows all over the world, movie stars and soap opera stars stop in for a bite to eat at the classic diner.

"I warn the people I hire that they may appear on TV. I haven't had anyone refuse yet," said Michelle.

Most guests give advance notice before dropping in for their burger and an icy cold root beer.

There was no advance warning last May when Oprah Winfrey and her friend Gayle King stopped by the diner for lunch. The two women were touring the U.S. and apparently started out along historic Route 66.

"I was in a meeting at the time and I received a call from Armando at the diner. He said someone from the Oprah Winfrey Show is here. I said, 'Oh, okay,'" Michelle Jimenez said. She thought at the time it was someone calling to ask for permission to film part of the show in the diner.

"I got a call a few minutes later saying, 'You better get down here. Oprah's eating lunch here,'" she said. At that point she hung up the phone, excused herself from the meeting and hurried back to the restaurant. Sure enough, sitting in the front room, enjoying a nice, juicy hamburger and an ice cold root beer was Oprah. Apparently a friend had told her that Mr. D'z was a great place for lunch.

"It was so exciting," said Michelle.

"She said it was the best hamburger she's ever had," said Michelle.

She liked it so much that the show called the diner the day before Labor Day to ask if the Jimenezes would be willing to ship 17 cases to the studio as a give away to the audience at the show. The brew is a special concoction created by Armando and his brother Nacho. It is available only at Mr. D'z. A special courier was sent to pick up the root beer and carry it to Chicago.

The studio also took several aerial shots of the diner for the show.

Michelle and Armando were also invited to the show and arrived as guests in the audience. They were able to watch the filming and production of the show.

They were previously warned that the exact air date of the show was unknown. The couple was just informed that the show will air at 3 p.m. on Monday on KTVK Channel 3.

The studio even notified KTVK Channel 3 in Phoenix and the local radio station about the airing of the show. KTVK sent a crew out to interview the Jimenezes. KTVK will be airing their interview with the Jimenezes before the Oprah Show.

The couple has leased the restaurant from Scott Dunton for the past six years. Armando was working as chef at the MGM Grand in Las Vegas when he decided he had had enough of the big corporate-type restaurants. The two heard from family and friends that the restaurant was up for lease. They drove out, liked the place and have been here ever since.

The diner was originally a gas station, and at some point about 30 years ago, was turned into a diner. The front room, where Oprah and her staff had lunch, was the spot where the gas pumps once stood.

The diner is a local haven for classic car and motorcycle enthusiasts. A recent episode of The Learning Channel's Biker Builder Off was filmed at the diner as well.

The diner has also appeared on travel shows in Ireland and Japan, and in international magazines and newspapers. Michelle attributes the diner's international fame to her husband's great cooking and the friendly staff. Michelle hand picks the staff to make sure she gets the friendliest people around. The staff ranges in age from teenagers in high school to a 72 year-old snow bird who makes the trip from Maine every winter.

"She just as fast or even faster than some of those other girls," said Michelle.

The Jimenezes have another five years left on their lease and they can't wait to see who else comes to visit.