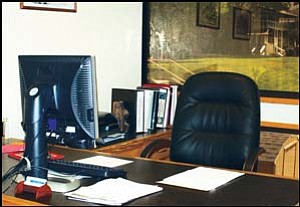 The chair in former City Manager Paul Beecher’s office sits empty after Council voted to relieve him of his duties. JC AMBERLYN/Miner

He had already cleaned out his desk and turned in his keys before City Council emerged from executive session Friday morning after his performance evaluation.

Paul Beecher had told the mayor before the meeting "he didn't see any purpose in being here," so he remained in his office and met with a few department heads before leaving city hall for the last time.

After 50 minutes of deliberation, Council emerged from the private room in the Council Chamber to announce what many in the community have anticipated for months.

"We have discussed the city manager's performance and employment agreement," Mayor Les Byram said. "What is the (Council's) pleasure at this time?"

No roll call was needed to tally the individual votes, as the members' voices were synchronized in their unanimous "aye."

"I think the city needs to go forward and heal now," Councilman Kerry Deering said after the meeting. "I think under the circumstances, it was the right thing to do."

The city has faced criticism and controversy for months over many of Beecher's public statements, policies and personal views expressed in e-mails released to the public.

From the well site issues with Rhodes Homes to a lawsuit over withheld public records requests, Beecher has been at the core of the city's recent troubles, according to one Council member.

"It's all based on his performance," Janet Watson said.

The latest issue, made public Wednesday, was a claim brought against the city by former Economic Development Director Jeff Weir regarding a severance agreement signed by Beecher without Council's knowledge.

This may have been the straw that broke the camel's back, as the special meeting was called immediately after Council was informed of the claim.

According to Weir's attorney, Weir and Beecher had signed a severance agreement about a week after Council voted in May to cut Weir's position and all funding to his department. But at the next meeting, the mayor and six Council members voted against leaving any money in the budget for severance, and they cast their votes without the knowledge that a legal contract was already in place. Now Weir is targeting Beecher and the city of Kingman for unpaid wages.

Due to a state law, he's entitled to triple the $23,750 salary payout. Including unpaid leave and benefits, the bill is around $90,600, not including attorney fees, which Weir is also requesting be paid.

Council didn't learn that Beecher had signed a severance agreement with Weir until three months after it was signed - and after Weir's attorney served the city with the claim.

Watson said she had spoken with Beecher before the meeting Friday to discuss, in part, why he didn't tell Council.

"When I met with him about it, he just said he was sorry, that he was wrong but gave no explanation," she said.

Deering also said Beecher had no comment other than to say "he just goofed up."

Councilman Tom Carter seconded French's motion, and after the meeting, he commented on the decision.

"Remember the days when honor was held above all else and people would submit a resignation when confronted with these types of situations?" he asked Deering. "What happened to those days?"

The mayor said in June, before Beecher's first performance evaluation on June 8, that it would cost the city around $250,000 to fire the city manager. The employment contract that Beecher said he wrote out on a legal pad gave him a year's salary after termination and the ability to cash in on unpaid leave.

Local developer and business owner Scott Dunton, who has made repeated calls for Beecher's termination at public meeting after public meeting, was relieved.

Dunton expressed some reservations about what comes next. As it is, the city will pay Beecher the $250,000 severance, based on his contract. Councilwoman Watson said, "We're going to do whatever we have to do" to have Beecher out.

"If they pay him anything to leave, they're out of their minds," Dunton said. "There's absolutely no way that they should pay him a dime."

Watson said Council will hold a work session at 5 p.m. on August 20 to discuss the process for appointing an interim city manager and beginning the applicant review process for finding a permanent candidate.

Public Works Director Jack Kramer has been appointed by the mayor as the acting city manager.