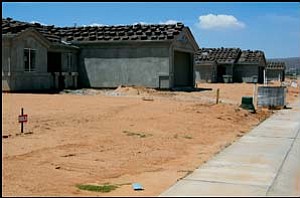 Shown here recently are some houses being built along Dafne Avenue. JC AMBERLYN/Miner

It's a buyer's market in Kingman. All you have to do is look at the numbers.

In July, there were 131 single-family residences listed in the Kingman, north Kingman and Hualapai Mountain areas.

There were 173 listings in July 2006. That month was the pinnacle for single-family residences listed in the past years, according to information compiled by Realtor Todd Tarson.

"Today is a buyer's market," Tarson said. "There is an oversupply of listings right now."

Tarson has been running a Mohave County real estate blog for more than a year. He said he posts the Western Arizona Realtor Data Exchange information online to provide a resource for potential buyers and sellers.

The Web site examines the real estate market in Kingman and Mohave County and is easily accessible to the public.

In December, there were 105 homes listed and 64 sold. The number sharply jumped to 152 listed and 40 sold in January. Homes listed then dropped back down to 102 in February with 42 sold.

What Tarson is lacking, as well as all other real estate agents is how many homes listed are vacant.

Tarson said an accurate number couldn't be created because vacant home listings do not always include developers' homes. He estimated 20 to 25 percent of listed homes in the Kingman area are vacant.

With such change and being the first down market he has experienced, Tarson said he wouldn't make any guesses about the future of home sales.

"It's crazy because no one can answer that," Tarson said.