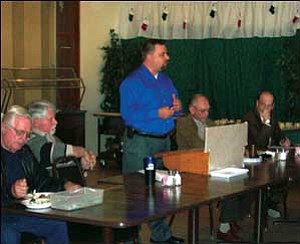 Four City Council candidates got their first tastes of public life at the Kingman Republican Men's Club luncheon Monday at the Elk's Lodge.

They each introduced themselves to the public and answered questions from attendees.

During her introductory speech, Robin Gordon, owner of Transerv Transportation, said, "Our community is terribly divided. We have a real identity crisis that we need to look at resolving. Kingman is going to grow, and it's up to all of us to determine what Kingman is going to look like."

She noted the need for fire protection in the Rancho Santa Fe area, and she said Kingman Crossing developers should not be given tax breaks to come into the community.

Young said she wants to promote partnerships with area schools, including the college, to create mentoring programs that prepare students for higher paying jobs that can be created in the city.

Local contractor and developer Travin Pennington spoke third and described his family ties to the community. He highlighted the need for a permanent city manager or "keeper of the gate." He said currently there is a "power vacuum" in the city - that outside developers like Vestar Development Co. have no single point of contact when attempting to tap into the market here.

In closing, he said, "I'll wake up early and stay late working on the problems and take my business fundamentals and apply them to city government."

Todd Tarson, the final speaker, is a self-described "newbie" to Kingman who has worked in real estate since 2001. He commented on the many changes occurring in the city, and he said government must manage those changes to benefit the community.

"We're always looking to expand our infrastructure needs," Tarson said. Referring to the proposed interchanges at Kingman Crossing and Rattlesnake Wash, he said, "Both projects are vitally important as we grow this community. They offer better public access, better public safety, of course, alternate routes of transportation. It's important that these projects go in to help the Stockton Hill area (traffic problems)."

Tarson said these projects could come to fruition as the result of partnerships between the city and deep-pocket developers or others with the money to fund such ventures.

After their speeches, the candidates took questions from the public, including a pointed one from Mayor Les Byram directed at Pennington. Pennington's father, Howard, recently was at the center of a community debate about the waiver of development impact fees for a new Praise Chapel church building. Referring to that debate and the financial consequences of retracting such fees, Byram asked Pennington what his "attitude towards the impact fees" would be as a Council member.

"I believe in the idea of impact fees," Pennington responded. "I'm not here to say anything against impact fees. I think they need to be looked at and dramatically reduced, especially commercial, because I believe commercial is the one category ... that has the ability to sustain itself in the form of sales tax.

"Right now, you are penalized for taking your life savings and investing that in a commercial building here in Kingman because of the impact fees, when the city in its entirety benefits from the sales tax production."

Again, Kingman Crossing topped the list of concerns put forth by those in attendance, with several people questioning the candidates about their views on big box stores and sales tax reimbursement agreements with developers for construction of the interchange.

All candidates said the next Council should be open to infrastructure reimbursements, wherein a developer fronts the full costs for a project and the city would use a percentage sales taxes as a reimbursement.

Outgoing Councilman Tom Carter asked if the candidates would support an increase in the sales tax rate, the city's primary source of revenue. Tarson and Gordon said they would. Young said she would as a last resort, and Pennington said he would not. "I think the city needs to look internally at cost-cutting measures first," he said.