Manzanita meals are served up hot 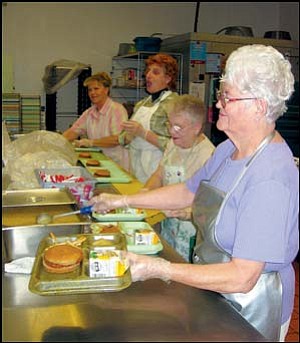 Berniece Vandiver looks forward to going to work five days per week at Manzanita Elementary School, where she is in her fourth year as a cafeteria helper. "I love working at this school," she said. "We have a great bunch of kids and I enjoy having them around. Another thing about the work at schools is that you have the summer off, Christmas vacation and spring break."

Breakfast often is prepared on the premises as only 50-60 students partake of it, Harris said.

"We cook vegetables ourselves and make our own mashed potatoes," Harris said. "Meat and french fries come over (from Hualapai), but we rarely have to re-heat them. We check temperatures on arrival and before serving."

The Manzanita kitchen is equipped with an electric steam table, hot cart, oven with six-burner stove and walk-in refrigerator. It has a separate room where trays and eating utensils are put through a dishwasher.

Shipments of milk are received Mondays and Thursdays. Harris took delivery this day of 22 cases, each containing 70 individual-sized cartons of milk that included chocolate and low fat white. Chocolate milk is served with meals on Tuesdays and Thursdays, and white is served the other weekdays.

Posted on one wall is an "excellence in food sanitation" certificate dated Oct. 5, 2006, from the Mohave County Department of Public Health.

Hot food must arrive at 140 degrees or higher from the central kitchen. Sampson checked the French fries upon arrival and found their temperature to be 150.

Miller bakes cookies for the district and had an amusing encounter Jan. 26 with a kindergarten boy, who was polite but indignant about no fresh cookies being available to purchase.

"A little boy comes to the window with a quarter burning a hole in his pocket and we had no cookies that day," Miller said. "He asked who makes the cookies, and the girls pointed at me. He asked me why there were no cookies, and I told him I was not told to bake any that day."

Miller baked 860 peanut butter cookies Jan. 29 and about 160 of them were delivered to Manzanita.

On average, 360-370 lunches are served each day to students, Harris said.

In what is a fast-food generation, children have become discriminating eaters at school.

"Days when we serve pizza are real popular," Vandiver said. "A majority of the kids like pizza.

"Fish is not popular. A lot of kids throw it in the garbage, so it's probably their least favorite thing."

Meatball sub sandwiches are another popular item, she said. Meatballs and sauce are delivered hot from Hualapai and Manzanita kitchen staffers heat up the buns and dish out four meatballs on each as they serve.

Harris said she has not run out of hot lunches so far this year. If it does happen, she calls the central kitchen and extra meals are quickly sent over to Manzanita.

Hot or not? Students talk about school food
School district ovens heat up before roosters call
KUSD food services supervisor juggles food groups and calories
Get A Grip: Fast food outlets in schools should go the way of the Cheese Boat
Top testers go on a dragon ride
Event Calendar