Hot or not? Students talk about school food 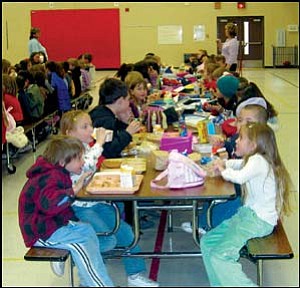 Lunch is a time to eat and socialize with friends in the gymnasium at Manzanita Elementary School. Photo: TERRY ORGAN/Miner

KINGMAN - Manzanita Elementary School students are vocal about their likes and dislikes when it comes to food served in their cafeteria.

Chicken patty on a whole-wheat bun, french fries, applesauce and low-fat milk were dished out at lunch Jan. 29.

First-grader Jay Gastineau said the meal was good but not hot. Second-graders Alex Antoon and Hayley Hughes said it was good and served hot.

"I like (chicken patties)," fourth-grader Maurice Longmire said. "It's my favorite."

However, Maurice said it was not hot when served.

Kayla Waltman, another fourth-grader, liked the meal and said it was hot.

Karma Jones, Kingman Unified School District food service director, said elementary children in the younger grades tend to engage in talk with students sitting next to or across from them, so that by the time they begin eating, the food has cooled.

Her statement was correct in that a reporter observed a good deal of socializing among the children, who occasionally took a bite of food.

Students were asked for particular preferences.

Alex said he would like cheese sticks done away with on the menu.

"I don't like wheat bread and would rather have white," Hayley said. "They should also add some lettuce to buns."

Take away garden salad and put hot dogs on the menu more often was the response from fourth-grader Matthew Donohoe.

Put ranch dressing on salads and do away with oven-fried chicken, Maurice said.

Take away fish entirely and offer strawberry milk in addition to low-fat and chocolate, Kayla said.

One boy had never had Texas cheese toast but said "Yeah" when asked what he thought of the chicken patties served the previous day.

French fries are not cooked "to perfection" and students should have the choice of white or chocolate milk every day, another boy said.

Students may purchase a milk of their choice for 35 cents anytime. However, white milk is served with all meals on Mondays, Wednesdays and Fridays, while chocolate milk goes on trays each Tuesday and Thursday.

He once got up to the lunch window to find food had run out and he was given a sub sandwich substitute, another boy said.

Cafeteria lead Beth Harris said in part II of this series the kitchen has not run out of lunches this school year.

Lunches are served at room temperature, but not "piping hot," another boy in line said.

"Meals are at the correct temperature when served," Jones said. "Get them too hot you could burn somebody and then you've got a liability problem."