Emergency? Not yet
But growth will create need for more urgent-care facilities 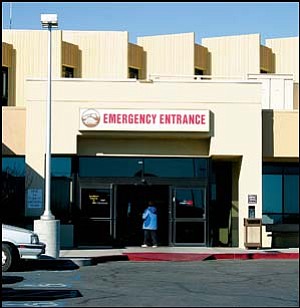 Members of the medical community say more emergency or urgent-care facilities will be needed in Kingman within the next five years. KRMC’s emergency room is one of the available options for urgent and emergency care in Kingman today. Photo: JC AMBERLYN/Miner

KINGMAN - Growth in Kingman will create a need for more emergency or urgent care capabilities within the next five years.

"We're going to need to expand our emergency room. We have a fast-track area within the ER with extended hours, but even that does not give us enough space. We often have people waiting in hallways, and that's not what we want."

Shah Salim, administrator of the Arizona Institute for Medicine and Surgery at 3636 Stockton Hill Road, said another urgent care facility will be needed in the future.

In a story appearing Dec. 28 in the Daily Miner, Dr. Michael Ward, medical director of the KRMC Emergency Room, stated waiting times for walk-in patients to see a physician had fallen from 110 minutes in April 2004 to 35 minutes in November 2006. In addition, "turnaround" time from when a patient entered the waiting room until discharge after ER treatment averaged 2 hours, 40 minutes in November.

However, officials at KRMC are already looking at future needs.

"Our community is growing and we've begun planning for a new emergency room," Gode said. "It's probably 18 months out before construction would begin.

"The question is whether to build on to what we now have or start over from square one? That's all to be discussed."

Dr. Joe Gochoco, a partner in Fastrax Urgent Care centers in Kingman and Lake Havasu City, also said added capabilities will be needed in the future.

"Seeing about 60 patients per day in Kingman, we know there's room for another urgent-care facility to take more of the load off the hospital emergency room, even though we have taken some of it off them," Gochoco said. "It's also more appropriate for minor illness cases to go to an urgent-care center rather than clog up the ER."

Gochoco added that population growth in Kingman and a limited number of physicians in the community means another urgent-care facility would be a welcome addition but that building something on to an existing facility would be fine, too.

The emergency room at KRMC runs the spectrum when it comes to patients. They come in with gunshot and stab wounds, injuries sustained in car crashes and falls, chest pains, flu-like symptoms, headaches, backaches and ear infections (mostly in children).

"Ear infections and urinary tract infections could be handled in a doctor's office," Gode said. "But if you can't get an appointment for a month, such problems can't wait. We provide non-emergency care, and we need to for the community."

ER personnel at KRMC saw about 3,200 patients in December, an average of 105 per day, Gode said. She rounded off figures (which do not add up to 100 percent) and said 1 percent of patients had critical concerns, 8 percent emergent, 45 percent urgent, 39 percent semi-urgent and 6 percent non-urgent.

Critical patients are "codes," patients in cardiac or respiratory arrest.

ER personnel do "protocol" procedures of X-rays, lab work and EKGs on most patients. CT scans and on-call specialists are available as needed 24 hours per day.

The Urgent Care Center at AIMS opened in January 1994. It offers X-rays, EKGs and lab work during normal hours of 9 a.m. to 6 p.m. Monday through Saturday.

"We get people with flu-like symptoms, along with industrial-type injuries that include fractures or broken bones, and we refer those cases to specialists," Salim said.

Fastrax gets many of the same type of patients with flu symptoms, ear infections, headaches, respiratory problems and minor injuries that include lacerations, broken bones and sprains, Gochoco said.