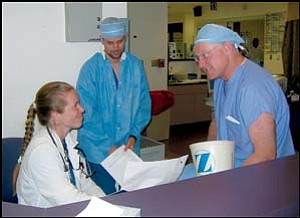 KINGMAN - Walk-in patients to the emergency room at Kingman Regional Medical Center, on average for the first six months of 2007, experienced shorter waits to be seen and treated than the state and national averages for 2006.

"Our average patient time in the ER for (the first half of) 2007 was 3 hours and 22 minutes," said Janet Gode, director of the KRMC Emergency Department.

The "turnaround" time is especially notable in light of a patient volume that rose nearly 20 percent in the past year, she said.

Gode went on to say patient satisfaction for ER experiences for the second quarter (April-June) was better than 84 percent of hospitals nationally.

Some other findings of the study included: ER waiting times increased in all states, except Hawaii; average ER waiting times rose by 30 minutes for every additional 10,000 patients seen annually; state by state waiting times varied from a low of 158 minutes to a high of 381 minutes; and patient satisfaction levels were highest between 7 a.m. and 3 p.m. and lowest between 3 p.m. and 11 p.m.

KRMC times are tracked from the time a patient signs in at the admissions desk, said Ryan Kennedy, executive director of operational services.

He could not furnish a breakdown of time periods (i.e. 7 a.m. to 3 p.m.) when patient satisfaction rates are highest and lowest.

"We have a variety of shifts that have been developed based on expected patient volume. We staff a board certified emergency medicine physician 24/7, and staff additional physicians or physician assistants during busier times."

While everyone in the emergency department is proud of improvements in waiting times, the staff continues to look at ways to improve patient flow, he said.

"We have received strong cooperation in this effort from other key departments such as radiology, lab, respiratory environmental services and nursing units," Kennedy said.