A bird in the hand ...
... is usually not the best move when finding wildlife ‘orphans’ 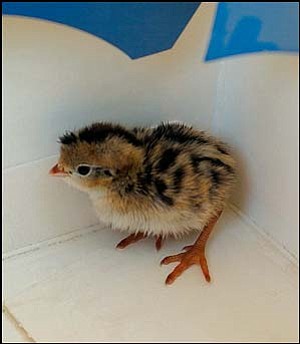 The author found this quail chick lying in the middle of a road with no parents in sight. JC AMBERLYN/Miner

KINGMAN - My first clue that something was amiss was when I noticed my dog staring intently at the ground off to the left of me. I took a look and saw a little huddled piece of mottled brown and tan fluff that I recognized as a Gambel's quail chick.

We were smack in the middle of a fairly well traveled dirt road inside Kingman city limits, with no other quail in sight (or sound), so I knew something had to be done. I scooped up the little bird, which was probably only a few days old, put the dogs in the car and spent the next 45 minutes searching for the baby's parents. I did eventually find one flock of quail, got as close as they would let me, put the chick down in the open and then watched from a distance. However, they seemed to have no interest in it, nor did they have any other chicks. I finally concluded that this little guy was now an orphan.

This time of year, a lot of people have experiences like mine. Spring and summer is the time wildlife species produce most of their young, and that means some people are going to have encounters of the wild and cute kind. However, people are not always sure what they should do if they find a wild animal that seems injured or orphaned.

Most of time, the best thing is to leave it alone. Jeff Pebworth, wildlife program manager for the Arizona Game and Fish Department, sees a lot of unnecessary disruption in the everyday lives of wildlife species. He explained that in most of the "orphan" cases, the baby was left by its mother for a brief time but was not an "orphan" by any means. Many wildlife species leave their offspring for periods of time while the mother eats or drinks, hunts for food or rests. Deer, elk and antelope fawns are an example of this, as are fledgling birds (young birds that have just acquired their flight feathers).

If you see a young fawn lying still in a wooded glade, or a fledgling bird is moving around your backyard with no parents in sight, leave it alone. The parents are nearby and will return to it, provided you don't frighten them off. Young carnivores are often left at den sites or "rendezvous" areas while the parents hunt.

Pebworth said that it is difficult for people to properly raise wildlife species. It requires knowledge of the specific requirements of the species in question, proper facilities, food, shelter and space. It also requires specific permits in order to be legal, as most wildlife is protected by law.

The animal's best chance, he emphasized, is with its own kind.

There are some wildlife rehabilitation centers in other parts of the state, including the Adobe Mountain Wildlife Center near Phoenix, and sometimes injured or orphaned wildlife from here are sent there.

He said that he wished we had something like that here, but we do not, and that makes it even more difficult to help out in individual cases. In addition, deer and elk fawns cannot legally be helped by the Arizona Game and Fish Department, due to concerns about transferring Chronic Wasting Disease.

There are times to intervene, however. Wildlife living in suburban and urban environments may encounter situations they are not prepared for. If you find an animal in the middle of a busy street, one that is being threatened by a dog or cat or one trapped inside an artificial environment such as a swimming pool or garage, it is time to do something. If the animal is merely trapped, then moving it gently and swiftly out of harm's way or leaving a door or pathway open for it to leave by itself is the best option.

If you find a young animal and are not sure if it is an orphan or not, leave the immediate area and watch from a distance. The parents should return in a few hours. If it is a nearly featherless bird that is too young to leave the nest but is lying on the ground, look for its nest. It is probably somewhere nearby. If possible, return the chick to its nest.

There is a misconception that parent birds will reject their young if they have human scent on them, but this is not true. In the case of precocial (able to leave the nest and move by themselves early on) species such as quail, search for the parents and try to reunite parents and chicks, but don't leave a chick with adult quail that show no interest in the baby - they may peck and kill the chick if it isn't their's. If the animal is a fledgling bird (feathered but not fully developed), place it up in the branches of a nearby shrub or safe area. According to the Arizona Game and Fish Web site (www.azgfd.gov), injured or sick animals are often lethargic. They may sneeze, drool, pant, shiver, sit ruffled, limp, drag limbs or have obvious wounds.

If the animal is truly orphaned or injured, it may be time to get it to a professional wildlife rehabilitator. If the animal is large or you are not sure what to do, you can call Arizona Game and Fish at 692-7700 for advice. If you approach the animal yourself, use caution. The animal will not know you are trying to help it, and an adult or young adult wild animal will most likely attempt to defend itself. Sometimes a towel can be useful in scooping up an animal safely. Then get it into a quiet, dark situation, such as inside a cardboard box with air holes, and get it to a professional as soon as possible. Cerbat Cliffs Animal Hospital, located on 4110 Stockton Hill Road, is currently the only veterinary practice in Kingman that takes in wildlife species.

Paula Acer, veterinarian at Cerbat Cliffs, says that her clinic sees a few hundred cases of injured or orphaned wildlife each year. They get a lot of baby birds this time of year, and a little later on in the season they start seeing juvenile raptors or birds of prey such as hawks and kestrels, some suffering from heat exhaustion. The animals are cared for, then released, or sent to the Adobe Mountain Wildlife Center for long-term care. Call Cerbat Cliffs at 757-8855 for more information.

Sometimes you have to wait a while before getting the animal to a professional caregiver. A few things to keep in mind concerning baby birds are, for starters, do not force-feed. Also, do not use an eye-dropper to try and give water to the bird, it could choke. According to the Web site of Liberty Wildlife, another wildlife rehab center in the Phoenix area, in an emergency a baby bird gaping for food can be fed soaked and mashed up puppy or kitten food mixed with water. Be sure to squeeze out excess water before feeding it to the baby.

Quail can temporarily be fed ground up and mashed bird seed or crumbled, hard-boiled egg. Be sure that baby wild animals are kept warm and dry; a heating pad can be placed in part of the animal's container, giving it a range of temperature choices. Many young animals can't regulate their own body heat and require an outside source.

The little quail chick I found was kept in this manner overnight until I could get him to Cerbat Cliffs the next day. Happily for him, they had two other quail chicks about his age, so now he has "siblings" to grow up with. His future is uncertain, but there are definitely concerned, caring people looking out for his well being.

If you encounter an injured or orphaned wild animal and have exhausted all options except for direct interference, call the numbers listed above, or try getting advice from an organization such as Liberty Wildlife at (480) 998-5550. Information on desert wildlife issues is available at: www.azgfd.gov/artman/publish/article_558.shtml and www.libertywildlife.org/urgent_main.asp.

An owl on the ground. To help or not to help – what is the answer?
Game & Fish caution against ‘rescuing’ young wildlife
Don't try to rescue young wildlife
Orphaned wildlife not what it seems
Outdoors: Baby wildlife most likely don't need your 'help'