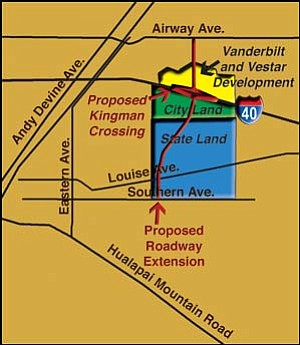 KINGMAN - In a closed-door meeting with city officials recently, the development firm that plans to build a retail mall on 200 acres off Interstate 40 at the proposed Kingman Crossing traffic interchange presented "an example" for sales tax revenue the city could give as an incentive for this company to build.

In January, Vanderbilt Farms, LLC bought approximately 200 acres from local developer Bill Nugent for $60,000 an acre. Vanderbilt, mainly an investment firm, has teamed with Vestar Development Co. on dozens of master-planned communities, strip malls and other retail centers mostly in the Phoenix area.

Sales tax incentive agreements in the past have resulted in millions of dollars in reimbursements to Vestar, but the incentives may not be part of the deal in Kingman.

"We haven't yet even had a formal conversation at all," Vanderbilt and Vestar spokesman Stuart Goodman said Thursday in a phone interview. "We made the presentation to Council ... we closed on the land back in January, and you know, I presume we'll begin discussions with staff sometime in the near future. I think it's sooner rather than later, but we have not had a formal conversation."

According to Goodman, the company nonchalantly mentioned 60 percent as an example of what has occurred in other communities. He reiterated in several conversations that because every community is unique, so is every agreement.

"It's really hard to measure or to compare from one community to the next because each project is so different," he said Thursday.

He called these incentive agreements more of a "reimbursement" for infrastructure than incentives. According to Arizona law, which calls it an incentive, the process of luring this type of development must include evidence compiled by a third party showing that without the incentive, the new businesses would not come.

The consensus from city officials, particularly from the economic development director, is that Kingman is a prime development area for any business, transit company or retail giant due to its connection to several major highways, its designation as a channel between southern California and the rest of the United States, and its recent population surge.

Mayor Les Byram said in an interview Thursday that the Kingman Crossing location is "the best spot left along Interstate 40 in northern Arizona" for this type of retail development.

Still, he said, the incentive package isn't off the table. He added, it's not necessarily on the table, either.

"I can't tell you what we will ultimately wind up with because we haven't discussed any of the details," he said.

Negotiations are right around the corner, according to Goodman, who thought releasing Vestar's history of accepting these incentives was premature given the minimal progress made on development plans.

But if the company doesn't request the incentive, City Council won't have to make the decision to give away a portion Kingman's sales taxes, which currently makes up more than half of the total general fund budget.

Goodman could not say because of the status of negotiations what the agreement would yield.

Byram informed Vestar at the private meeting with city officials, which included councilman and executive director of the Kingman Airport Authority Inc., Dave French, that the sales tax revenue is the lifeblood of Kingman. A 60 percent incentive to a city that doesn't receive property tax likely won't work out, he recalled saying. Property taxes gathered in Kingman don't pay for city services. They go to the county. This means that sales taxes pay for all utilities and services - everything from street repairs to police protection.

Despite it being a "normal activity" for Vestar to receive sales tax incentives from communities in which it develops, Byram said he told the company, "If this is going to be a deal, you're going to have to do better than that."

When asked again whether or not the incentive was possible, Byram said he's not yet going to oppose the tax flat-out because formal planning hasn't commenced.

"If it's good for the city, then we'll look at it, but the details will have to be in writing before we do anything," he said.

For Kingman, City Council would need to pass the incentive program with four votes if such an agreement came to fruition.

The sales tax incentive was not mentioned during the presentation to the full city Council, staff and about 60 residents who attended the Feb. 20 Council meeting, but according to several newspaper articles from communities in the Phoenix area, development companies vying for sales tax incentives are a common practice.

Details of past agreements have sometimes been met with community opposition. In Oro Valley, a fast growing community just north of Tucson, Vestar and the local government agreed to an incentive of 45 percent in April of 2004 totaling $23.2 million over 10 years.

Some residents opposed the deal, formed a group called Stop O.V. Outrageous Giveaways, and found themselves in court trying to resolve a dispute over what was later determined a "technical defect." SOVOG gathered 1,200 signatures from residents who opposed the government's deal with Vestar, but the city clerk said she didn't accept them because SOVOG incorrectly filed the referendum, according to court records. The Arizona Court of Appeals ruled in favor of SOVOG after Vestar and the group went back and forth with claims and counter claims over the interpretation of the referendum statute, records show.

"That election validated what Vestar proposed and what the City Council approved," he said Friday in a phone interview.

Oro Valley voters passed the incentive agreement by a 16 percent margin in March of 2006.

In Santee, Calif., a similar funding crisis that Kingman is facing confronted this Southern California city. Santee agreed to a sales tax incentive of 75 percent during the first seven years to open the mall and increase city revenue, according to The San Diego Union-Tribune.

Vestar has, at least in one deal, accepted a property tax abatement on top of a $26.7 million sales tax incentive.

The practice of luring in commercial business through sales tax incentives is drawing much attention in the Phoenix area as state lawmakers are currently engaged in discussions and attempts to create legislation barring what many call "giveaways."

But while state legislators try and curb the practice, Phoenix officials remain vocal about the benefits of the incentive deals.

According to a Feb. 18 report from the Arizona Daily Star, Phoenix has made 27 agreements in the last 18 years. These agreements have cost the city $35 million, according to the report, but they have brought in an estimated $330 million in sales taxes.

Other parts of law

According to Arizona Revised Statutes, before entering into an incentive agreement with a private company, cities and towns must show that business wouldn't locate in the city without the incentive and that the commercial development would "raise more revenue than the amount of the incentive."

A simple majority of the governing body is required for approval of such an agreement except in towns located within 25 miles "of the exterior boundary of a metropolitan statistical area having a population of more than two million persons." These cities must approve the agreement with a two-thirds majority.

The findings of the above-mentioned requirements about revenues exceeding the incentive and what consists of a majority "shall be verified by an independent third party before the city or town enters into the retail development incentive agreement," according to ARS Section 9.

The company receiving the tax incentive, it continues, "shall not finance the independent third party verification of the findings or have input into the selection of the ... findings."

Before adoption by the governing body of any agreement, it must adopt a notice of intent two weeks prior to the vote.

Besides the one or two private meetings with Vestar, the mayor said he wants to assure the public that everything about this deal will be in writing and openly discussed at public meetings.

"Whatever we do ... there will be no deals behind the scenes," Byram said. If an agreement is reached that benefits both parties, he said later in the interview, the financial details of the deal will likely be discussed in a private executive session.

Working with Vestar is Tempe-based company Vanderbilt Farms LLC, which in January closed a deal with local developer Bill Nugent on 200 acres on the north side of where the Kingman Crossing interchange is proposed. The manager and advisor to Vanderbilt, Conley Wolfswinkel, is also the father of the company's owners, Ashton and Brandon Wolfswinkel. The Miner reported Wednesday that Wolfswinkel, a former Phoenix-area real estate tycoon, was convicted of fraud in 1993 for bilking taxpayers in an infamous savings and loan scandal.

Conley Wolfswinkel filed for personal and corporate bankruptcy following the revelation about his involvement with one of Charles H. Keating's companies. Wolfswinkel still owes taxpayers approximately $2 billion from civil lawsuits filed in the early 1990s.

Byram and City Manager Paul Beecher have both stated that Wolfswinkel's past won't stop them from doing business with Vanderbilt, if a deal transpires, because the development arm of the partnership is Vestar.

"They don't have to be developers on our side, so to me it's not that big of an issue, personally," Beecher said Tuesday.

Figure in scandal linked to Crossing
Reimbursements are not incentives
Council hears from Vestar on Crossing
'From our standpoint, not much has changed'
Vestar catches heat in Gilbert