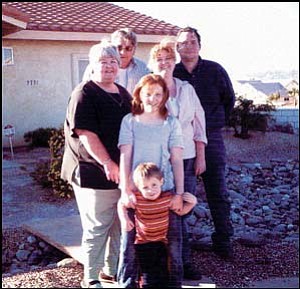 KINGMAN - Tammy Towry is trying to be brave for the sake of her 12-year-old daughter and 4-year-old son. But the little boy is having difficulty understanding what has happened to his world.

A funeral for him was held March 5, and that night, Sam Perry, Tammy's 72-year-old father, was admitted to Kingman Regional Medical Center with an upper respiratory infection and two blood clots in his right leg.

Perry since has been moved to a nursing home for physical therapy. But his prognosis is not good, as he suffers from peripheral T-cell lymphoma, which produces skin cancer.

"It's my understanding that one in every 100 cases of non-Hodgkin's lymphoma is this type, so there are not a lot of treatments available for it," Towry said.

Doctors have not given her a prognosis, but her father likely will be placed in hospice care when he comes home, she said.

Towry has been a teacher for five years. She began teaching seventh- and eighth-graders at Cedar Hills School in August.

Compounding her circumstances is that Towry faces foreclosure on her home in May. She is trying to work with a mortgage company to get a loan modified, but even if successful, she worries how she will keep up the payments as she is out of work.

"I've resigned my teaching position because of everything going on," Towry said. "I could not think of lesson plans and grading papers with my dad's health situation.

"Friday will be considered my last day with the school district. I'm using bereavement and personal days off now and have not worked since Roger died."

Towry said her son attends Grace Neal Preschool at St. Johns United Methodist Church and she is struggling to find the money to keep him there.

She has received sporadic donations of $100 here and $25 there. Her brothers and sisters have come to visit their father and give her some diversion.

In addition, her mother is on spring break this week but must return to work next week, meaning one less family member to help her cope.

"One thing that helps is realizing Roger is no longer suffering," Towry said.

"He was a veteran of Operation Desert Storm and suffered post traumatic stress disorder. His medication was not working and he was having a very hard time coping with life. Everything was bugging him. We were trying to get his disability approved and that caused financial hardship because he could not work."

Towry said she is in "survival mode."

She has no more tears to cry and must be strong for her family.

Anyone wishing to help may contribute to the Roger Towry Jr. benefits account at Mohave State Bank, which is located at 3737 Stockton Hill Road.

Towry said she is trying to figure where to go from here and does not have the will to go back into teaching at present despite her love of the profession.