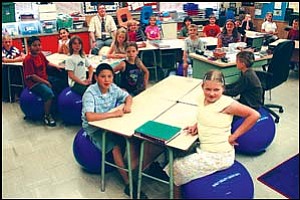 Brock Odegard’s third-grade class at Manzanita Elementary School is making use of stability balls, instead of standard chairs at desks. Some of the advantages include improved posture, exercise and stretching. J.C. AMBERLYN/Miner

KINGMAN - One classroom of third-graders at Manzanita Elementary School is trying something new to enhance education.

For the past two weeks, Brock Odegard's students have been getting acclimated to sitting on "stability balls."

Awesome and great are two adjectives Mario Barocio used in describing them.

"They're helpful for writing and spelling because they make me sit up straight," he said. "It took a lot of effort to get used to them because they made my bones sore and back hurt at first."

Kaylee Bolton, another student, said using stability balls forces one to keep his or her balance.

"They're fun to sit on and feel like balloons," she said. "It's fun doing work while sitting on them. If I start to get stressed, I do a little jumping."

Odegard saw an online newspaper article on stability balls in February in the St. Cloud (Minnesota) Times. He was a substitute teacher in that community during 2003-2006.

Odegard obtained literature about them from WittFitt, the creator of the burst resistant latex-free balls, and then went to school Principal Gretchen Dorner, who agreed to let him order enough of the balls for his classroom.

The Manzanita Student Council paid for them, although Odegard's students have helped offset part of the cost by holding two fundraisers, a pizza night and a car wash.

Odegard ordered 24 stability balls at $27 apiece. One inflates to 65 centimeters in diameter for his use, while the remainder pump up to 55 centimeters, which is recommended for third-graders.

"We began using them two weeks ago," Odegard said. "They force you to sit up straight, and in so doing, keep your back aligned."

Students had to pass several tests in order to qualify to get a stability ball.

Those tests included what you want to know about them, history of stability balls, proper use, care and rules with them, and spine and posture.

Students used the stability balls as seats 30-45 minutes the first week, 60 minutes per day this week, move up to 90 minutes daily next week, and then in the fourth week, should be able to use them without going back to standard chairs.

A few students have experienced problems so far and have been permitted to use chairs as they try to get used to them, Odegard said.

Stability balls were invented in Italy in 1963 and have something like spikes on the bottom to hold the sitter in place. Odegard said they remind him of a cow's udder.

In addition to improving posture, the balls are useful in a variety of stretching exercises explained in accompanying literature.

His class is the only one in the Kingman Unified School District using stability balls at present.

Odegard said he is not aware of schools outside of Kingman in the state in which they are utilized.

"We often talk about movement as being part of learning, and stability balls permit some movement," he said. "Students can bounce slightly in class."