Tests make sure election computers are ready to run 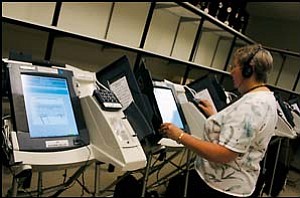 The County Elections Department is already gearing up for the Golden Valley Incorporation election on Sept. 11. Last week, the department tested its voting equipment.

The department is required by law to test the equipment at least 10 days before every election, said Elections Director Allen Tempert. The public as well as candidates are welcome to watch the testing of equipment, but usually no one comes.

"I want people to see this," Tempert said.

The test simulates what would happen in a real election. The county has two types of voting equipment that have to be tested before each election, the optical scan machines and the touch screen machines.

The county also has several of the new touch screen machines. These machines are designed to help make it easier for voters with disabilities to cast their votes. The machines have headphones, a keypad and the ability to enlarge type.

Tempert said all voters, even those without disabilities, are welcome to use the touch screen machines.

The tests for both machines start with the department receiving sample paper ballots for the optical scan machines and a ballot program for the touch screens.

Employees carefully go over both sample ballots to make sure there are no errors.

In order to test these machines, employees fill out several test ballots. They also purposely make some common voter mistakes, such as filling in two bubbles or not filling in any bubbles for a race.

Once the test ballots are finished, the machines are "zeroed out." The memory of each machine is checked to make sure there are no votes already in the system.

Then employees run the sample ballots through machines. The machines should spit back any ballots with mistakes on them.

Most voters don't realize they have mismarked their ballot until the machine spits it back at them, Tempert said. In that case, voters can request a new ballot from poll workers.

Or if the voter deliberately filled in both bubbles or didn't fill any bubbles for a candidate or issue, poll workers can override the machine and the rest of the voter's ballot will be counted. In last week's test of the equipment, all the optical scan machines rejected the mismarked ballots.

Once department employees are finished running the test ballots through the machines, they close out the machines just as they would at the end of an election night. A tape of all the voting results, issues and races is printed from each machine. Then a number of the machines are connected to a phone line, and the results from those machines are dialed into the computers in the department's Central Count Room.

Tempert sits in the Central Count Room and watches to make sure that the voting machines poll into the central computer and that the counts match the sample ballots that were input to each machine.

He tests the other machines by bringing them into the Central Count Room and directly uploading their votes into the central computer. This simulates what might happen if a polling place could not get a phone connection with the department after an election.

Tempert said the most common issue the department runs into with both the optical scan and the touch screen machines is that it can often take a couple tries before the machines connect with the central computer.

To test the touch screen machines, employees use a special card reader to create a voting card. The card is similar to a hotel room key in that it can be used over and over again. Each time it is used, it is wiped clean of any information on it.

The voting card is then put into the machine and the ballot appears on the screen. Employees then vote using predetermined results, just like with the optical scan machines.

If a voter skips a race or forgets to vote in a race, the machine will alert the voter to the fact when they try to finalize their ballot. Voters can either go back to the race and vote or override the machine and not vote for that issue or race.

Each machine also keeps a tape record of each vote. Voters can view the tape through a little window on the side of the machine.

Once employees finish inputting the test votes into the machines, several of the machines are connected to phone lines and the votes are dialed into the Central Count Room.

Other machines are connected directly into the computer in the Central Count Room. Tempert then checks the results as they come in.

Last week's test only took a few hours, but a test for a full fledged November election can take several weeks. Ballots have to be checked, and then different test ballots have to be made for each race and issue, then the machines have to be tested.

Residents and candidates can also watch the real election results come in on election night. The department streams live video from the Central Count Room to a room in the County Administration Building at 700 W. Beale Street.

For more information on polling places and to check if you are registered to vote, contact the Mohave County Voter Registration Office at 753-0767 or check out the Web site at www.co.mohave.az.us.