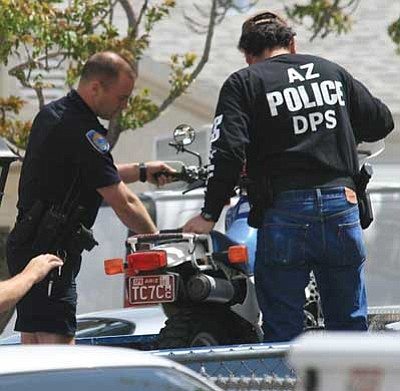 KINGMAN - The Mohave County Sheriff's Office has released an amended list of charges for some of the subjects arrested in the citywide methamphetamine bust by the Mohave Area General Narcotics Enforcement Team on April 9.

Some of the original charges were changed when the subjects were booked into the county jail, said Trish Carter, public information officer for the Mohave County Sheriff's Office. The changes were due to information gathered from some of the 16 residences that were searched and the ongoing investigation into the drug ring.

Seventeen of the 18 subjects wanted in connection with the drug ring have been arrested or turned themselves in. Two warrants are still outstanding, for Bryan Irving Baldwin, 42, and Jose Rascone of Kingman.

The MCSO also released the names of eight subjects who were arrested during the raid on unrelated charges.

According to MAGNET and the MCSO, the investigation into the drug ring, which brought in more than 520 pounds of methamphetamine and $18 million in meth sales annually into the Kingman area, is still ongoing.