Column: Here's what is new on the Kingman education beat 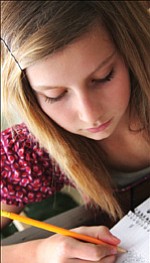 Kingman Academy of Learning High School has a mentor program in which its students work with teachers at the district's primary and intermediate schools to benefit younger children.

Students are assigned various tasks by the teacher that may include running learning centers, decorating bulletin boards, reading one-on-one with the younger students, administering timed tests and other classroom tasks.

The mentor program has been recognized on the Web site of Arizona Public Schools Making a Difference Day, according to a news release.

Dean Colvig, special programs coordinator for the KAOL, said the program has positively impacted about 1,500 students.

"Elementary school students end up receiving more individualized attention and instruction from both the teacher and student mentor, and it's awesome to see the connection between the high school students and the younger kids," Colvig said. "The younger students really love it, and they really look up to the mentors.

The program also has helps the 16-to-18-year-olds "explore outside the perimeter of their teenage world. It's a way that they can see teaching as a possible career choice," he said.

The program now is in its third year and has succeeded for two reasons, Colvig said. One is the close proximity of the primary and intermediate schools to the high school; the other is the willingness of teachers to give of their time in order to make it successful.

The Web site is www.azschoolsmakeadifference.org.

School districts were notified via memo April 22 that there may be less money available for education next year.

In the memo, Arizona Superintendent of Public Instruction Tom Horne said, "The 2008 budget has been adopted. I was required to cut $10 million out of non-formula line items. I was able to do this without a significant impact on schools.

"I am told that I have to cut $10 million out of the 2009 budget. That will be much more difficult, and there will be no way to avoid some impact on schools. There may be a cut of approximately 10 percent in non-formula state grants."

"The 2009 budget has not been adopted and nothing is certain," he continued. "But I felt obligated to get notice out as early as possible so this information can be taken into account in planning next year's budget."

Brownie Hamlyn, finance director at the Kingman Academy of Learning, said the financial climate at present is scary.

The state Legislature is not far enough along in the budget battle to give the KAOL "a feel."

"Some people I talk to for 2008-09 say that for charter schools funding will remain relatively the same, while others say they may try to cut some," Hamlyn said.

The American Legislative Exchange Council released its 14th edition of the Report Card on American Education: A State-by-State Analysis. It covers school years 1985-86 through 2006-07, a news release stated.

There have been significant increases in the amount of educational resources spent on primary and secondary education during those two decades. Expenditures in Arizona reached an all-time high of $6,339 per student, yet student performance has improved only slightly with 74 percent of eighth-graders performing below proficiency in math and 76 percent below proficiency in reading, according to the National Assessment of Education Progress.

"Raising student achievement levels and improving our schools must involve new and innovative solutions, and examining the data in this publication is a step in the right direction," ALEC Education Task Force Chairman Nancy Spence stated in the release. "We need to hold our schools accountable, demand results, and provide parents with more choices when it comes to their children's education."

The report may be viewed online at www.alec.org.