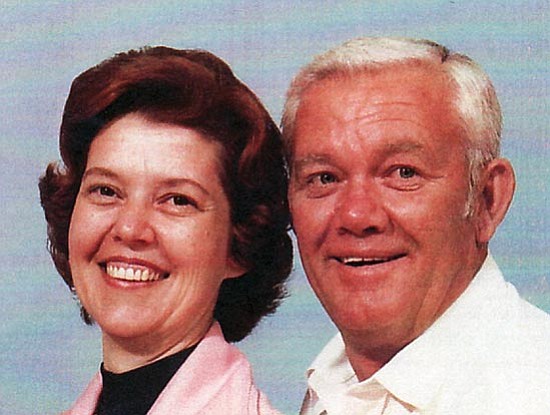 Penny was born in Wichita, Kansas, on July 20, 1929. A professional singer as a young woman, Penny gave up that career after marriage to become a full time wife, homemaker and mother. She continued to bless all with her beautiful deep voice in church choirs and in other venues.

Dick was born on March 30, 1925, in Locust Grove, Okla. As a young boy, Dick practically lived on the golf course and became a PGA pro. Dick left the PGA Tour to be closer to his family but continued to work as a pro at a local golf course.

Dick and Penny moved to Las Vegas from Sedona in 1982, so Dick could continue his involvement in the professional golf business.

Penny worked in the banking industry as an operations manager for about 15 years until she retired. As a cancer survivor, Penny thanked God for the blessing of each and every day and was totally devoted to her family.

After years in the golf profession, Dick was happiest here in Las Vegas, helping to promote, plan and start local golf tournaments.

Penny touched the lives of every person she met with her gentle spirit and it was often said that she could light up a room with her smile. She will be greatly missed by all who knew her. She was greeted in heaven by her mother, Aileen Hollaway; her father, Henry Duncan Hollaway; her sister, Iona Matlock; and her brother, Lee Gordon Hollaway.

Dick had a contagious sense of humor and a special gift for sharing the stories of his life. He was greeted in heaven by his wife, Penny; his mother, Irene Phillips; his father, Claude Ellis Phillips; his brothers, Harley Phillips and Jimmy Phillips; and his sisters, Marie Ward and Patsy Brewer.

There are no services planned. In lieu of flowers, please donate in Penny and Dick's honor to their favorite charity, St. Jude Children's Hospital.