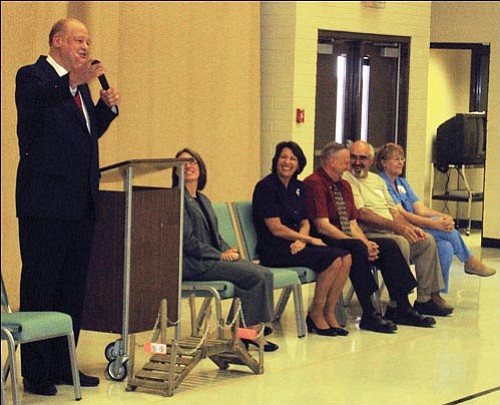 KINGMAN - State Superintendent of Education Tom Horne recognized the Kingman Unified School District and tackled issues the Arizona Department of Education is facing during a brief tour of Kingman.

Horne was the guest speaker at the Kingman Republican Men's Club meeting during lunch on Monday, after a stop at Manzanita Elementary in the morning.

Horne said he often comes to Kingman and Mohave County with his family to engage in outdoor recreational activities - including water sports.

"Mohave County is like my second home," Horne said.

Horne addressed Arizona's Instrument to Measure Standards, as well as his battle with the Tucson Unified School District concerning ethnic studies at the luncheon.

While Arizona is ranked 49th out of 50 states for money spent on a student, Horne said Arizona students' performance remain above the national average on TerraNova and other testing. Horne attributes the results to student graduation being dependant on passing AIMS testing.

"It's very important we maintain this accountability," Horne said.

Accountability, he said, not only falls on the students, teachers and administration, but on him as well.

"I see part of my job, not only to give you the best education I can, but save you money as well," Horne said.

Horne said his current highest priority is to add social studies to the AIMS testing - a subject he feels isn't receiving enough attention.

"You have to do well academically in today's world to make it in life," Horne said.

At the heart of the TUSD issue is the district's Ethnic Studies Department.

Horne said students should be taught that people should be judged as individuals, not race.

"This is the land of opportunity," Horne said. "They should learn that if they can work hard, they can achieve what they want, not that they're oppressed."

Horne cited textbooks used by the district, which he felt described the majority of the Southwest as still belonging to Mexico. He added he felt the courses left students angry and hostile.

"When you walk into a school, you can feel the atmosphere immediately," Horne said during his visit to Manzanita on Monday. "The students have been enthusiastic."

Horne was on hand to present an award recognizing the school for obtaining Performing Plus status with their test scores. "The ultimate measure is test scores," Horne said.

"It's not broke, I'm not going to fix it," Wolsey said of her plans to at least maintain educational status. "We're going to continue to do the same thing: meeting students' needs academically and emotionally."

Wolsey said they hope to beat last year's scores this year. She added her main goal this year was to become an A+ school.

Wolsey said she remembers when the school earned the status when she taught at Manzanita for 12 years.

"I plan on keeping traditions in place here," Wolsey said.

During the last three years, Wolsey has served as assistant principal at Mt. Tipton and La Senita Elementary.

Students from kindergarten through fifth grade honored Dorner, who has moved on to director of Title One and Assessment with the school district.

"Honestly, I was overwhelmed with pride and a bit speechless," she said of the presentation by the students.

Dorner will oversee AIMS testing for the KUSD. Under Dorner, Manzanita received the Performing Plus recognition for the 2005-2006 academic school year and the following school years.

Joining them this year is Palo Christi Elementary. This is the first year for Palo Christi to obtain the Performing Plus recognition.

Kingman Unified School District Superintendent Roger Jacks said he is excited about Manzanita and Palo Christi's achievements. While the Arizona Department of Education has not released the results, Jacks said Horne alerted them to the two schools' results in order to deliver the certificate.

"Compared to the state as a whole, Kingman is doing very well," Horne said.

Horne pointed to the district unifying years ago, a move that he said is recently sweeping the state.