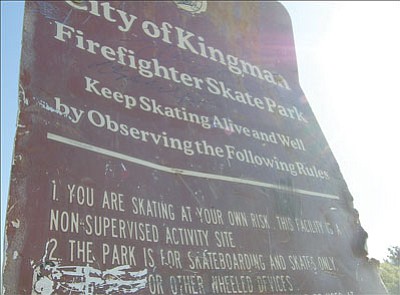 JAMES CHILTON/Miner<br><br> A sign stating the rules of the skateboarding facility at Firefighters Memorial Park bears the signs of repeated vandalism, including the scratching out of ï¿½no bikesï¿½ under section two. Several other signs prohibiting bicycles in the facility have been vandalized or stolen.

KINGMAN - Musician Les Emmerson once wrote, "Do this, don't do that, can't you read the sign?"

But what about when you really can't read the sign? For bike enthusiasts in Firefighters Memorial Park, the city of Kingman's answer is still "Don't do it."

The Kingman City Council on Monday voted unanimously to approve a resolution that alters a section of the city code prohibiting bikes from being used at the skateboard facility in the park at 2001 Detroit Ave. While the city has always banned bikes from the facility, the city code previously required the city to post "no bike" signs when enforcing the ban.

But those signs were routinely the victims of vandalism or outright theft, leading to the adoption of Monday's ordinance. It eliminates the section of the code requiring the signs to be posted. While the city has said it intends to continue posting the signs, it will be able now to enforce the bike prohibition even if the signs are illegible or stolen again.

City Attorney Carl Cooper was the city official responsible for bringing the ordinance before Council. He said the city was seeking to strengthen its ability to enforce the bike ban, since the city is unable to procure insurance to cover the use of bikes in the skate park, as it was not designed for them.

"Basically it was designed for skateboards, and the physics of skateboards and bikes are different," Cooper said. "I know that (Human Resources Director Jackie) Walker has approached the insurance company regarding this, and they will not provide the coverage based on the design."

Councilwoman Robin Gordon said she wanted to make that point clear to members of Kingman's biking community. She said Council was not actively seeking to inconvenience bikers, but rather to protect the city's liability.

"We're not trying to be mean to the bike riders or not understand their needs," she said. "But this park was not designed (for them), so it's not safe."

Councilman Kerry Deering noted that at its Nov. 3 meeting Council had voted to pave the way for another skate park at 1712 Adams St. whose owner indicated she wanted to build a BMX bike track next to the facility.

"Hopefully they'll be able to get that going so that'll fill the void," Deering said.

But Council was met with opposition from one Kingman resident, Amy Curley. While Curley said she had no issue with the city's liability concerns, she was bothered that the ordinance as written could allow violation of the bike ban to be construed as either a civil or criminal offense, when violation of similar prohibitions are merely civil offenses.

"All of the other offenses to the rule similar to this one are listed as civil offenses, including the coasting vehicle ordinance as well as the motorized scooter ordinance," Curley said. "I'm wondering if Council could explain to me...why (this violation) would be determined as criminal?"

Cooper responded, saying that most of Kingman's city code violations are actually listed as civil or criminal, which provides the most flexibility for pursuing charges.

"Because it's listed that we can prosecute it criminal doesn't mean somebody's going to get a ticket the first time around," he said.

"Usually what's going to happen with law enforcement is that you get a warning once, maybe twice, depending on who the person is, how they behave in the situation, how many times they've been out doing this."

"And that'll be up to the discretion of the officer?" asked Mayor John Salem.

"They're going to have the discretion of the officer," Cooper replied.

Cooper said in the event an officer does cite a criminal violation of the bike ban, the charges could still be dismissed if the violator concedes to some kind of community service program or a small fine.

"The likelihood of getting a criminal conviction is gonna be down the road a little bit in my mind," he said.

Councilman Ray Lyons made a motion to approve the ordinance, with Keith Walker seconding. The motion passed 7-0.

Skateboard park glides past Council
Light agenda for Council
Ban on bikes at skate park to be enforced
Punishment for zoning violations clarified in Kingman law
Vehicles for sale: It's the<BR>'where' that's the problem