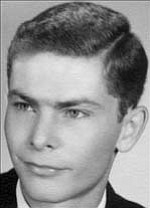 Born Jan. 30, 1949, in Lansing, Mich., he spent his childhood an easygoing, happy child who loved to fish, and spent his time on his grandparents' farm. His family moved to Kingman, Ariz., when he was a teenager.

His adventurous side emerged and he found a love of drag racing on the barren roadway of what is now a busy Stockton Hill Road. If he only knew he'd end up living in the heart of NASCAR country, he might have made a career out of it!

In 1968, he met the love of his life and wife of 38 years, Linda Mead Kellogg, in Kingman. After a long engagement due to the Vietnam War and his time in the Air Force overseas in Korea, they were happily married at the United Methodist Church in downtown Kingman in May 1971.

Ron continued his career in the Air Force and the young couple were stationed in Shreveport, La. The young nurse and her handsome husband in uniform spent their first years of marriage enjoying the single life.

They soon moved back to Lake Havasu City, Ariz., where Ron was employed by Citizens Telephone Company. They welcomed two daughters, Kristen and Shelly in Lake Havasu as well.

A family complete, Ron took a transfer with Citizens to Kingman where he would raise his family and retire with 25 years of loyal service. He then spent the past 10 years in Tulsa, Okla., where he finally retired after many years in the telecommunications industry.

A quiet, generous man, Ron was always a dedicated, hard worker who focused on providing the best for his family.

An admirable, ethical man, he always taught his girls to do the right thing. A kind, loving man, his unbounded love for his family never faltered.

Ron will be forever loved, missed and always remembered by his dedicated, beloved wife Linda; his eldest daughter, Kristen Smith; her husband, Andrew Smith; and cherished grandson, Colin; his youngest daughter, Shelly Kellogg; and his treasured granddaughter, Ella, all of Charlotte, N.C.

Ron is also survived by his mother, Grace Kellogg of Mesa, Ariz., and his sister, Sandy Pearlman; brother-in-law, Bill Pearlman; niece and nephew, Megan and Josh, all of Mesa; as well as many other extended family and lifelong friends.

A celebration of his life will be at 1 p.m. on Friday, Dec. 5, at Heritage Funeral Home, Indian Trail, N.C.

Arrangements for the Kellogg family are in care of Heritage Funeral Homes, Indian Trail. An online guest book is available at www.heritagefuneral.net.