Santa to visit as MCC Shines 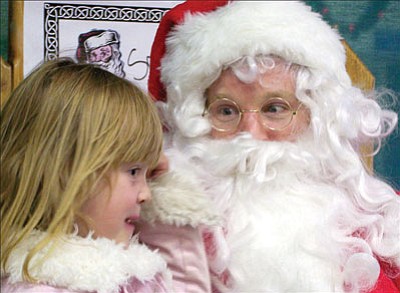 Courtesy<br><br> Santa Claus talks about holiday gifts with Callie Luke, 6. He will be all over Mohave County on Tuesday as MCC Shines lighting ceremonies occur on all four campuses.

KINGMAN - A holiday glow each evening from Tuesday to Dec. 19 is Mohave Community College's gift to the communities of Mohave County as "MCC Shines" marks its third year on all four campuses.

MCC Shines began as the brainchild of the Mohave Community College Foundation in Bullhead City, and for the third year now involves all four campuses under the direction of the campus presidents.

There will be refreshments, entertainment and fun activities for all ages to enjoy surrounding the lighting ceremonies.

"This is MCC's gift to the communities and residents we serve," MCC Chancellor Michael Kearns said.

The Neal Campus's kick-off ceremony will run from 6 to 7 p.m. in Building 200. The event will feature holiday music, light refreshments, and jewelry sale.

An appearance by Santa and Mrs. Claus is expected around 6:30 p.m.