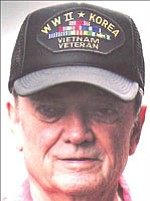 Mr. Taylor is survived by his second wife, Joan M. Taylor of Kingman. He has four daughters and three sons-in-law from his first marriage to Norma Lee Taylor, who passed away in 1984: Pat (Ken) Stuart of Sierra Vista, Peggy (Donnie) Thames of Glendale, Pamela Russell of Scottsdale and Paula (Curtis) Moreland of Gilbert; as well as four stepchildren from his second marriage: Mark (Dawn) Anderson of Bowling Green, Ohio, Pamela (Jeff) Fjeld of Kingman, Cindy Lusk of San Antonio, Texas, and Steven Anderson of San Antonio.

Mr. Taylor joined the U.S. Army at the age of 16 and was a distinguished veteran of three wars: World War II, the Korean conflict and Vietnam.

He was an experienced Mohawk and helicopter pilot, and served as a Mohawk unit commander in Vietnam. He also retired from Civil Service in 1984, where he worked in the U.S. Army Intelligence Center at Fort Huachuca, Ariz.

For the past 14 years, Mr. and Mrs. Taylor have resided in Kingman.

Funeral arrangements are being handled by the Sutton Memorial Funeral Home, 1701 Sycamore Ave.

A viewing will be held from 5 to 7 p.m. on Wednesday, Dec. 10, at the Sutton Memorial Funeral Home. Interment services will be held at 11:40 a.m. (Arizona Time) on Thursday, Dec. 11, at the Southern Nevada Veterans Memorial Cemetery, 1900 Buchanan Blvd., Boulder City, Nev.

In lieu of flowers, the family requests that donations be made in his name to the American Heart Association at: donate.americanheart.org/ecommerce/aha/aha_index.jsp.