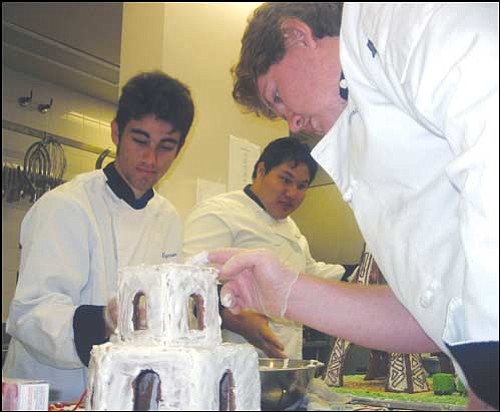 KINGMAN - While we're weeks away for dreams of sugarplums, you can now have Gingerbread Fantasies.

The annual competition is currently underway, with gingerbread homes created by community members on display at Kettlehut Antiques, 308 Beale St.

In its third year, the competition was the brainchild of Mary Wise, a member of the Downtown Merchants' Association.

"It's a fun way to look at a traditional aspect of the holidays," Wise said.

The first year, there were 32 entries. The entries have declined since, with 18 last year and 17 this year.

Chef Michael Gaul hopes the trend will change and the competition can grow to the size of Prescott's, which has a whole gingerbread village. Gaul leads the culinary arts program at Kingman High.

Students from his three classes in the program submitted 11 entries, Gaul said. Gaul also said the elementary schools would participate in the competition in the future.

In his ninth year at KHS, Gaul said he has had students create gingerbread houses during the winter every year. They have participated in the contest annually, having between eight to 12 entries every year.

"I let them do whatever they want," Gaul said. "They get the creativity going."

Mission Bank has paid the entry fees for gingerbread houses created by the program at the high school, Gaul said.

There are three competition groups for the contest: adults, teen and children. A winner will be selected for each group for best group entry and best individual entry.

Select community members will judge the gingerbread houses at 10 a.m. on Saturday. They will award Best of Show and $100 to the top creation of all entries.

The public can view the entries until Friday, which have been on display since Saturday. They can also vote on a favorite for the People's Choice Award.

Seniors Carlson, Rachel Simmons and Viviana Sandoval are creating an entry together for Gingerbread Fantasies for the second year. Just because the group is having fun doesn't mean they don't want to win.

Gaul said the competition is a valuable experience for his students - some of them have expressed a desire to go to culinary schools.

"I wish there were more competitions like this," Gaul said.

Students in the program participate in the Careers through Culinary Arts Program competition and the Family, Career and Community Leaders of America competition in spring.

Locally, the students compete in the Gingerbread Fantasies and the annual education fair.

Chef challenges community with gingerbread competition
Run, run as fast as you can to 'Gingerbread Mania'
Mayo cooks up a career at KHS
No contest, no problem:
Kingman Photos: Candyland Houses