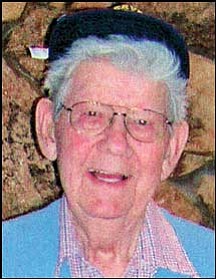 Roy worked for Timkin Roller Bearing Company from January 1942 to February 1944, when he went into the U.S. Navy.

He served in the Navy from February 1944 through October 1945 as seaman first class. He also served as the ship's cook.

Roy and Hazel had six children and lived in Canton, Ohio, where Roy drove a school bus and worked for Tyson Roller Bearing Company.

He retired in May 1976 after 20 years of service to move to Dolan Springs. He and Hazel owned and operated an Exxon service station for seven years.

Hazel passed away in September 1985. Roy moved to Kingman and married Arlene Coffin on July 4, 1987. They were devoted members of the Cross of Christ Lutheran Church and were married for 20 years before Arlene passed away in June of this year.

Roy was also preceded in death by a daughter, Linda Payne.

Roy loved to bowl and remained active, bowling on several leagues, up until his passing.

He was a very loving and devoted husband, father and friend who will be dearly missed by all who knew him.

In lieu of flowers, the family requests donations be made in his honor to the above church.