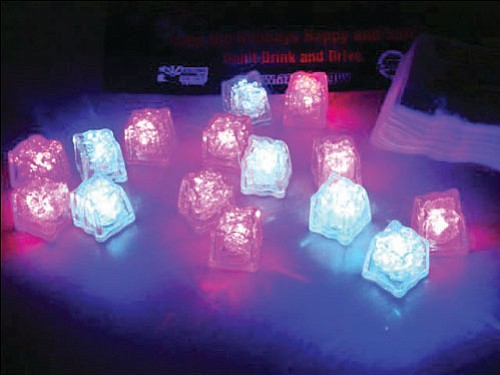 Courtesy<br><br> Blinks in your drinks will serve as a reminder to not drive while intoxicated.

KINGMAN - Local law enforcement is hoping the only red and blue lights you see this holiday season are in your drink and not in your rearview mirror.

The Mohave County Sheriff's Office and police departments in Kingman, Bullhead City, Lake Havasu City, Mohave Valley, Fort Mohave and Golden Shore have coordinated with the Arizona Governor's Office of Highway Safety and the Arizona DUI Task Force to pass out thousands of plastic ice cubes with red and blue LED lights in them.

The lights blink when the cubes are immersed in water or a drink. The law enforcement agencies are hoping that the lights remind party-goers not to drink and drive.

Local law enforcement is also continuing its Thanksgiving search for drunken drivers. The Mohave County Sheriff's Office, Kingman Police Department and the Western DUI Task Force have been on the hunt for drunken drivers countywide since Nov. 25.

Of the 29 traffic crashes investigated by MCSO in the same period, four involved minor injuries with no alcohol involvement. Of the 22 non-injury crashes, three involved alcohol. Statewide, more than 1,600 DUI arrests have been made so far.

The fines drunken drivers face this year are particularly steep due to recent changes in DUI laws. Drivers found guilty of DUI can face up to $3,200 in fines, 10 days in jail, have their license suspended for 90 days and receive an ignition interlock device for one year.

An ignition interlock device prevents a drunken driver from starting a vehicle.

Motorists found guilty of extreme DUI, arrested with a blood alcohol concentration of 0.15 to 0.19 percent, face fines up to $5,900, 30 days in jail, a 90-day suspension of their driver's license and an interlock device for one year.

Those motorist found guilty of the new super extreme DUI, with a BAC of 0.20 percent or more, face even stiff penalties. They could be fined up to $8,300, spend 45 days in jail, have their license suspended for 90 days and have to drive with an interlock device for 18 months.

The Western Arizona DUI Task Force, MCSO and KPD is asking drivers to buckle up, be responsible and don't drive drunk and only get in the car with a sober designated driver behind the wheel, or call a cab.