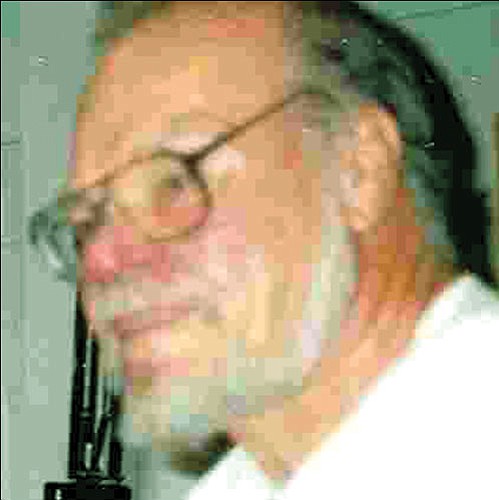 Dick Bass was born Valentines Day, Feb. 14, 1928, in Billings, Mont., where he became interested in art by drawing local cowboys and the wildlife of Montana.

Dick graduated from USC with a degree in architecture and was involved in building and designing homes in Massachusetts, Florida and California. Since his first love was his artwork, he started his professional artist career by working with Walt Disney at the beginning of Disneyland in Orange County, Calif.

Dick was a legend in his own time and shared his talents of creating paintings, sculptures and woodcarvings throughout the Southwest and sold some of his work to Raymond Burr, Vincent Price, Charles Bronson, and various art collectors throughout the world. His work has appeared in many art exhibits throughout the nation and has been featured in Southwest Magazine, Arizona Highways and various periodicals.

He loved Kingman and set up his Gallery by the City Cafe on Andy Devine and Stockton Hill Road and became friends with many in our community. He previously owned galleries in Jackson Hole, Wyo., Scottsdale and Sedona, Ariz. Dick had a love of life of all people and was always considered his dear friends as his family. He had resided at Sun Ridge Village in Bullhead City for the past five years.

The spirit of Dick Bass will remain in our hearts as he paints for us a beautiful journey in the afterlife. Mr. Bass started his journey after passing on Dec. 24, 2008, at the Gardens in Kingman. A memorial service for the public will be held at 1 p.m. on Wednesday, Dec. 31, at Sutton Memorial Funeral Home, 1701 Sycamore Ave., Kingman.