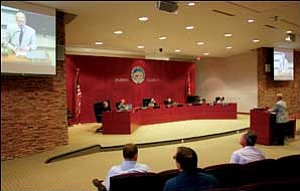 After 33 months of staff work, the new jail for Mohave County was approved by the Board of Supervisors Tuesday. Supervisor Buster Johnson was the only supervisor to vote against the project.

The county will be able to expand the facility in the future to handle more prisoners.

The building is expected to cost the county around $74 million. Around $25.5 million will be paid up front with funds from the county's quarter-cent sales tax. The remaining $48.5 million will be financed through a lease-to-own agreement with the builder/developer of the facility, FaulknerUSA.

Faulkner will sell Beneficial Investment Certificates to cover the upfront cost of the building. The certificates are sold to investors, who are essentially purchasing part of Faulkner's lease agreement with the county.

The county will pay back the certificates by using sales tax revenue.

The highest rating a certificate can receive is AAA.

The county will start to put the certificates up for sale in the next two to three weeks, he said.

Supervisor Johnson asked several questions about the financing and ultimate cost of the jail.

He questioned a statement in the contract which said the price of the certificates was not to exceed $80 million.

Timko said he did not believe the certificates would exceed $80 million even with interest.

The first-year payment on the building would be around $5.11 million, and by year 12 the payment would be up to $5.23 million, Timko said, well within the county's current revenue projections for the sales tax.

Johnson also expressed concern that the county would outgrow the facility in less than five years, especially if the state decides to send more prisoners back to the counties. The county might have a better deal partnering with a private prison company, he said. The company could build the prison and charge a per diem rate to the county and other communities to house prisoners.

After so many years, the county would have purchased the building through its agreement with the company.

County Manager Ron Walker said he didn't know of any company that would give a jail away for free.

The Board then moved to approve the new jail.