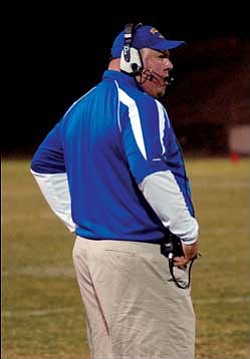 Kingman High's Athletic Director Tim Casson said he would like the pride of Kingman football and the reputation that Kingman is a tough team to play to return to the school. For those reasons, head Coach Jay Weakland has not been offered a football contract for the upcoming season.

"We want to be viewed as a well-respected program," Casson said. "When you start the spiral of not winning, the kids don't want to be a part of that."

Weakland spent four years at the helm of the Bulldogs' football program. In those four years, Kingman posted a 5-35 record.

The 2007 campaign was Weakland's best, when the Bulldogs finished the year 2-8.

"It's a shame to have built this thing up, and when we were just starting to turn the corner to have to leave it," Weakland said.

Casson said that Weakland's won-loss record was not the only factor in the decision made by the school's administration.

"The program as whole, including participation, was discussed," he said. "Though Coach Weakland increased the numbers, we want more."

Casson also said that the decision was a difficult one due to the areas that had improved under Weakland's watch, such as the team's behavior.

Weakland said that he was notified last Wednesday by Casson that Casson and Principal Pat Mickelson had reached the decision to give someone else the opportunity to coach the team.

Weakland said he pointed out the positives of the program to Casson, but he was told that they were intangibles.

"He told me that he didn't have anything to offer the parents and the community. He said it came down to wins and losses," Weakland said.

Weakland met with the football team to announce the school's decision. Weakland said that many of his players were taken by surprise. "I told them if they like the sport that they will need to commit to the new coach and the new philosophies that will be brought in," Weakland said. "They need to stick together to face the adversity."

Weakland said that he would be stepping down in June from the guidance office at KHS. He said that he already has some job prospects and that he will be fine.

"I told Tim that I'm not here to be a guidance counselor or a teacher. I'm here to be the head football coach," Weakland said.

Weakland wanted one more year as the head coach because he believes that this would be the year that Kingman put together a winning season. "My goal was to come in here to turn this program around. I would have liked to have been the one to see it come to fruit," Weakland said. "I wish I was given five (years) and not four. But coaches come and go. It's not a Shakespearean tragedy."

Casson said that the school would look both locally and out of town for a replacement. He said that within hours of his meeting with Weakland, an application had already been submitted. "The football coaching fraternity is close-knit and word travels fast," he said.

Casson acknowledged that Weakland had made progress in the last four years, but the school was hoping for more than what had been accomplished.

"I respect him a great deal," Casson said. "I like him as a person a great deal too, but felt strongly that it had to be done."