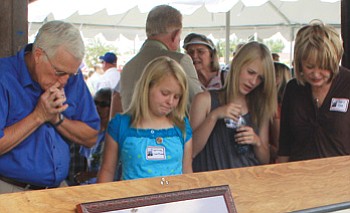 JC AMBERLYN/Miner<br><br> Jimmy Cox Jr., whose father was killed in the Doxol Plant explosion 35 years ago, views a photo display of the lost men set up at Firefighters Memorial Park. Also pictured from left are Courtney Cheatheam, Megan Cheatheam and April Cox.

Hundreds gathered to remember their fallen family and friends at the 35th anniversary memorial ceremony of the Doxol explosion.

They packed the gymnasium at Kingman Middle School on Saturday sharing memories, updating each other on life's happenings and making sure never to forget the sacrifice of the 11 firefighters who died as a result of the propane railroad tanker explosion on July 5, 1973.

"It's 35 years later, and it still feels like yesterday," said Bob Barger, director of Arizona Fire, Building and Life Safety.

Barger was one of three speakers, which included Mayor John Salem and Professional Firefighters of Arizona President Tim Hill, to stand before the community following the presentation of the colors and flag ceremony.

The most poignant moment came during the bell ceremony.

Following the ceremony in the gymnasium, the KFD rededicated the memorial plaque at the neighboring Firefighters Memorial Park.

It was followed by a Careflight helicopter flyover.

Kingman Fire Prevention Specialist Keith Eaton was one of the many within the department to plan the memorial.

"The thing about doing this and preparing for the memorial is that we got to know them (the firefighters)," Eaton said, "and getting to see the faces that were connected with them, that was a real pleasure."

Kingman Fire Captain Bob Casson was one of those who suffered a great loss 35 years ago. His father, William, was killed at the scene.

"They did a great job and everything," Bob Casson said. "I've been hearing from the families that they're very appreciative of the efforts."