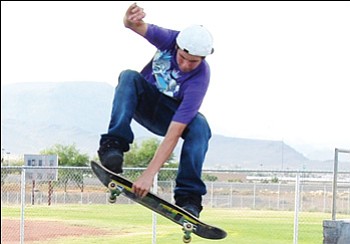 SHAWN BYRNE/Miner<br><br> Forrest Sai soars through the air at the skate park Tuesday.

Though there seems to be plenty of skateboarders and BMX-style riders in Kingman, the youth who enjoy these sports lack the opportunity to put their skills to the test in competition.

"We had a competition like two years ago," said Matt Child s, a skateboarder. "It cost $2 to enter and first place was like $6."

The group of skaters at the skate park in Firefighters Memorial Park all seemed eager to have competitions held in Kingman. "Once a month would be sweet," Forrest Sai said.

The kids seemed to think that better prizes would bring out more and better competition. They felt as if prizes like decks and bearings would bring more interest. "I think a competition in Kingman would draw at least 30," Sai said.

Several ideas for events in the competitions would be a best trick competition along with 30- and 60-second street runs. Another aspect of an event would be to have skill-level divisions versus age divisions. "I got killed in an age-division contest in Bullhead," Justin Pennington said.

Pennington said that the competition in Bullhead City was a combination bike and skate event. He said that there were approximately 60 contestants, and the event listed a maximum of 100.

Finding someone to organize a competition for the large crowd of bikers and skaters that show up nightly at the skate park is easier said than done. Between the two groups, there were at least 25 kids at the park on Tuesday.

Those at the park quickly pointed to Pat and Michelle Hurley as local experts of the skating world. The Hurleys own and operate Outer Limitz Clothing on Beverly Avenue, though the couple is planning on moving to 2107 Stockton Hill Road.

"It's tough to put on a competition because of the costs," Pat Hurley said. "Especially the insurance. But these kids need someplace to go."

Hurley said he had put on a demonstration show twice in the last three years in conjunction with Sugar Skateboard, Co., or Sugar Sports. The tour did not stop in Kingman last year because Sugar Sports was unable to be here on the date that Hurley could schedule the event.

Prior to the Sugar Sports event, Hurley said that he approached the Parks and Recreation Department because the lights needed to be replaced at the park.

"They jumped right on it," Hurley said. "But I've told the kids that if they want to keep the skate park, they'll have to take care of it."

Not only are the kids responsible for making sure the park isn't vandalized, they have to put the lessons they've learned about sharing into action as well. There isn't a location in town for the BMX riders, so they have been congregating at the skate park, too.

"I would like to see the bikers and the skaters get along," Hurley said. "The city won't spend any extra for the bikers, so why does one group rate over the other at the park? They just need to get along."

Hurley said that his shop has become a place for these kids to come and talk. If there is any adult who understands them as a group, it's Hurley.

For Hurley, the kids at the skate park have received a bad rap because they're skaters. He just wants to see them receive the respect that they deserve. "The adults need to respect the kids more and stop yelling at them," he said. "If you're nice to the kids, they'll be nice to you. They need something to do."

As with all youth activities, it's pretty easy to see where the kids need the most help. "It all starts at the parent level. They have to keep their kids involved," Hurley said. "That being said, these kids are lucky to have a skate park in Kingman."

Hurley believes that there can be a bright future for skating and biking in Kingman. He thinks that an indoor skate park is a perfect fit for Kingman because the winters are harsh enough, and the heat in the summer would make an indoor park a comfortable place for the kids to ride. "It would also provide additional revenue sources," he said. "There could be a pro shop and concessions, plus other shops."

The downside to an indoor skate park is money. The cost of going through the permit process with the city, along with the insurance expenses needed make for large obstacles to hurdle. "It would take a deep back pocket," Hurley said.

For any kind of organization to come into play for the kids that would begin to offer them the steps necessary to take their sports to the next level, the kids will first have to look to themselves to get any action rolling in their favor.

"The vandalism at the park has to stop," Hurley said. Before getting any competitions to show off their skills, the kids at the skate park will have to pass this test.

Groundswell begins for BMXers
Column: Someone should step up for BMX, skateboard kids
Ban on bikes at skate park to be enforced
Letter: Skaters need to band together
Skateboard park glides past Council