Lessons learned from the loss 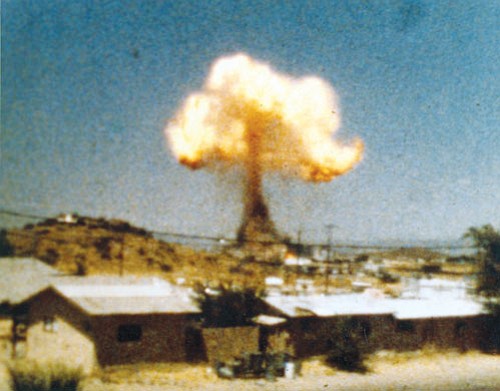 MOHAVE MUSEUM/Courtesy<br> A distant view of the explosion on July 5, 1973.

KINGMAN - Described as one of the most tragic events in fire service, the impact of the Doxol explosion in Kingman has been felt in fire stations across the country, as the tragedy became a lesson on how to fight a hazardous materials fire.

The boiling liquid expanding vapor explosion (BLEVE) on July 5, 1973, which took the lives of 11 firefighters and one civilian, provided video footage and photographs to dissect and examine.

"In honoring them, we have to prove that we learned from their loss," Bob Barger said.

Barger is the director of the Department of Fire, Building and Life Safety. He had been with the Phoenix Fire Department for three years when the tanker exploded.

"I remember seeing this as a young firefighter and thinking, this is interesting," Barger said. "It made me think of what we are up against."

The incident made hazardous materials a higher priority in training, Barger said.

Davis, 56, was a volunteer with the Kingman Fire Department at the time and responded to the call.

"I think they did the most intensive investigation because this was like the third or fourth BLEVE that had occurred," Kingman Fire Captain Bob Casson said. "But this one they went over with a fine-toothed comb."

Bob Casson lost his father, William, a captain with KFD, in the explosion. At a hazardous materials presentation more than a decade ago, the instructor discussed the incident.

"Bottom line was, his comment was, these guys are this close to getting done what they needed to get done," Bob Casson said. "They were establishing supply lines from a hydrant so they can set up a monitor to start flowing the amounts of water."

Now with increased training, current firefighters can accomplish the test in less than a minute, Bob Casson added.

Webb, who lost his father Donald in the explosion, said he watched the video of the BLEVE when he went through the fire academy in the early 1990s and even again during hazardous materials training four months ago.

There have also been advances in personal protective equipment during the past 30 decades, Bob Casson said. The KFD volunteers at the time often responded to calls without full gear. Firefighters now take the opposite approach.

"In some ways, it allowed us to get into situations that are maybe a little too dangerous because it insulates us so well from the heat," Bob Casson said. "That is one of the issues that is a concern right now because the equipment is so good, we can get in further, get in environments that are that much hotter."

Beyond it's significance with the fire services, the BLEVE in Kingman had a tremendous impact on tank car design, Kingman Fire Battalion Chief Porter Williams said.

Williams, who lost his volunteer firefighter father, Lee, in the explosion, said the cars are now double-jacketed with insulation with an exterior shell and an interior shell that's got installation in between.

Even with the video and photographs to use in training, nothing beats experience.

A few years after the explosion, Davis was attending a training slide presentation and would have to correct instructors on the location of the fire engines at the time of the explosion. It's a task he was often faced with at training sessions since the incident.

"The people that were in the fire service at the time this happened aren't in the fire service today," Davis said. "Training like that was good to let the young firemen, to bring it back to their attention that it's still out there. The hazard has not gone away."