Old Kingman favorite reopens
Se&#241;or Taco is back and dishing up tacos, burritos and taquitos to hungry customers 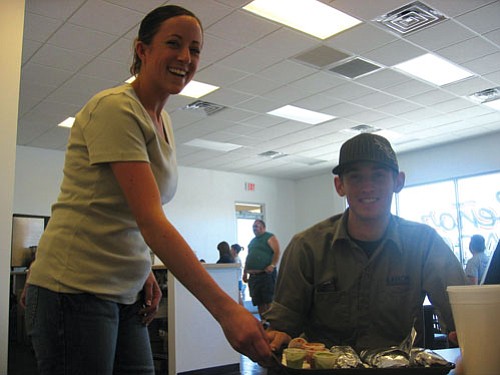 KINGMAN - If you haven't taken a drive down Hualapai Mountain Road in a while, you might want to hop in the car - as in, anytime between 10 a.m. and 8 p.m. Monday through Saturday - because Señor Taco is back in business.

That's right, Señor Taco, a fast-food fixture in Kingman since the days of the Nixon administration, reopened last Monday at 2535 Hualapai Mountain Road. And while, sadly, the drive-through window is no more, owner Lori Barkhurst said the menu of handmade tacos, burritos and taquitos remains unchanged.

Originally a franchise out of Tucson, Kingman's Señor Taco opened at its original location on El Trovatore Hill in the early 1970s under the ownership of Dorothy and Richard Brown, Barkhurst's parents. In its earliest days, it was called "El Taco."

After going independent when the corporate side of Señor Taco folded, Brown's franchise kept using the old company's recipes, which call for a kind of authenticity that's hard to find in the larger fast-food taco chains.

"Everything is cooked from scratch, it's not from a mix," Barkhurst said. "Our beans are fresh, we blend them up."

Señor Taco's Stockton Hill location, next to Interstate 40, served the people of Kingman throughout the 1980s, even as it shared the building with a Dairy Queen franchise.

"The Dairy Queen was at one end of the building and we were at the other," Barkhurst said. "And then in '86 (Brown) purchased the Dairy Queen."

For the next 20 years, Brown and family ran the Dairy Queen in tandem with Señor Taco, and all was well. Then, in 2006, Dairy Queen's corporate headquarters finally caught wind that one of their franchises was serving unauthorized menu items. Señor Taco's end swiftly followed, but not before one last hurrah from three decades' worth of loyal customers.

"Our last day was phenomenal," Barkhurst said. "They still have people ask for Mexican food at the Dairy Queen."

Over the next year, Señor Taco's fate remained uncertain. Wherever she went, Barkhurst would find herself hounded by scads of ex-customers clamoring for her return.

"Every time we went somewhere, someone was asking us when we were going to be doing something with it," she said. "When we were gone for the year, it was like losing part of our family."

So it's only natural that, when Señor Taco reopened May 26, word of mouth alone produced lines out the door.

By the end of her second day, Barkhurst had already run out of food.

"I didn't even open on Wednesday," she said.

Stunned at the positive reception, Barkhurst said she asked one customer why he had chosen to wait in line so long. His response was, "It's not just the food, it's Señor Taco."

And it's true. Señor Taco is not just another restaurant - it's a generational phenomenon that's drawn Kingman together for more than 30 years. In just two weeks, Barkhurst has seen countless familiar faces.

"You can walk in and know almost everybody in here," she said. "My parents are in here, I'm in here, my children are all working here. That's how it's always been."

The personal connections she's made with local contractors have also gone a long way toward spreading the word as well. Many of the people who helped Barkhurst get situated in her new location are those she's done business with for years.

"I used Highland Construction, Walker Electric, Benchmark Plumbing, Campbell and Parker, Ott - Bruce Ott did my sheet rock," she said. "Richard Martin did my concrete, helped with the stain and stuff. There's a lot of contractors who went above and beyond."

MySpace and other blog sites have helped spread Señor Taco awareness over the Internet as well. Local Realtor Todd Tarson devoted the May 29 entry of his "MOCO Real Estate News" blog to the restaurant, posting close-up photos of some of his favorite menu items.

While Señor Taco is still undergoing some of the difficulties that come with any transition - "Coming Soon" was still painted on the front window Wednesday morning - Barkhurst hopes to redecorate the rather Spartan interior once business levels off.

If she's learned anything, though, it's that Señor Taco's glory doesn't lie in the decorations, or even the food, but rather, in the people who congregate there. And if last week's reception is any indication, the glory days have already returned.

"It just has been very nice seeing all the familiar faces," Barkhurst said. "This is Kingman. I don't know how else to say it."