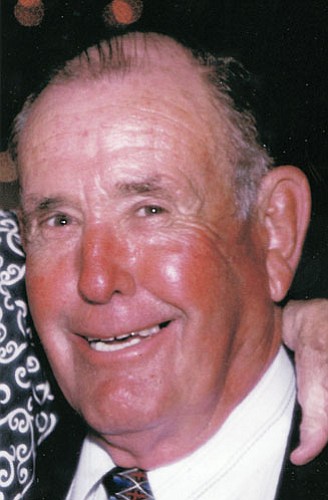 Chug was born in Hackberry on Feb. 14, 1925, to John Henry Grigg and Emma Wynona Forsythe Grigg. With the exception of his military service during World War II, Chug lived his entire life in Hackberry. Being a very patriotic American veteran, he never missed voting in an election and did so in the same precinct for more than 60 years.

Chug entered the U.S. Army on July 13, 1943, and was stationed at Camp Callan, Calif., where he went through basic training and auto mechanic school. He was then sent to the South Pacific where he was assigned to the 373rd Anti-Aircraft Artillery Battalion at a base on Manila in the Philippines as a member of the motor pool. He received military qualifications of sharpshooter rifle on Jan. 17, 1944, and marksman rifle on Jan. 13, 1944. He was wounded in 1945 and brought back to Fitzsimons General Hospital in Denver. He receive an honorable discharge on Jan. 25, 1946, as a private first class.

While recovering in Denver, Chug met and married the love of his life, Blanche Pearl Grinestaff, on Nov. 30, 1945. The couple moved their ready-made family to Hackberry, where Chug returned to work with his father in the garage and service station business. After his father's death in 1967, Chug and his sons built a new garage, service station and towing business where they worked together until January 1979. In July 1974, they had purchased the Union Oil Bulk Plant in Kingman, and in 1967, they purchased the Union Oil Service Station at Andy Devine and Third Street in Kingman. In 1984, this building was converted to a package liquor and self-service fuel store. The building now houses the downtown post office. In October 1978, they purchased the Union Oil Bulk Plan in Needles, Calif.

Chug finally retired in 1994. In his younger years, he loved to hunt and fish with his boys. After retirement, he and Blanche traveled as much as possible. They traveled to Hawaii in 1973, and he loved their many trips to Mexico.

Visitation is scheduled for 10 a.m. on Thursday, June 12, with the service to begin at 11 a.m. at St. Johns United Methodist Church in Kingman. Burial will follow at the Hackberry Cemetery.