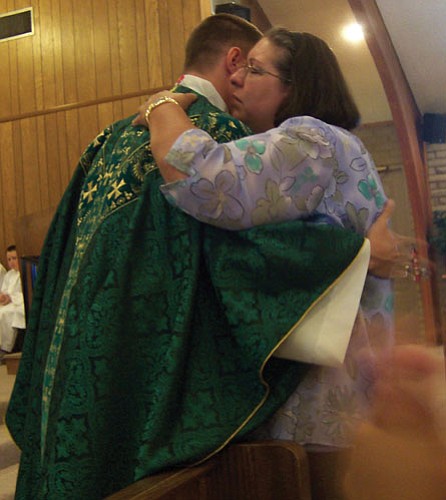 KINGMAN - It only took 102 years, but St. Mary's Catholic Church in Kingman had their first parishioner become a priest.

The Rev. Arthur L. Nave Jr., 27, was ordained on Saturday in Phoenix before the Diocese of Phoenix Bishop Thomas J. Olmsted.

"It's an amazing feeling," Nave said. "It's a shock that you actually got there."

Nave began his religious studies straight out of high school - first at Mt. Angel Seminary in St. Benedict, Ore., then at the University of St. Mary of the Lake/Mundelein Seminary in Mundelein, Ill. He also had a yearlong internship at St. Daniel the Prophet Church in Scottsdale.

While his education took years, the Mass at Sts. Simon and Jude Cathedral in Phoenix on Saturday didn't. Nave, along with two other priests, was ordained into the Roman Catholic diocese during a more than two-hour ceremony.

Nave was the only priest from Kingman ordained and holds the distinction of being the first Kingman native to be ordained a priest from St. Mary's Catholic Church, 302 Spring St.

"It's very humbling just to think that of all the people living in Kingman, I was the first one to respond," Nave said.

After the ceremony, Nave led a Mass at a Scottsdale church on Saturday.

"It's hard to describe, to be standing in that position," Nave said. "It was a very humbling and amazing moment for me."

Following a reception, Nave drove up to Kingman to participate in his first Mass in Kingman as a priest at 10:30 a.m. on Sunday.

"It's a very special moment to me to come back to my area and celebrate with them," Nave said.

Nave will now have June off before beginning his tenure as parochial vicar at St. Thomas Aquinas in Avondale. While there, Nave will assist the diocese with the Boy Scouts of America organization and their religious focus.

Generally, priests have two stays assisting at parishes before being given their own to lead, Nave said. The diocese would determine how long he spends at each parish, he added.

"I just want to be where the church needs me and just be a faithful servant to the church," Nave said.

Nave said the late Rev. Phillip Reiser, who died after presiding at St. Mary's, inspired him.

"I felt called into service," Nave added. "It developed, and off I went."

Nave's calling to the church is something that he has noticed increasing in the Roman Catholic faith since the period the religion was under the reins of Pope John Paul II and the rise of the youth ministry outreach.

With more than 5,000 men in seminaries across the country, Nave said the Diocese of Phoenix has been working to ensure quality candidates over quantity. There are three more candidates set to be ordained next year, he added.

Being the first priest ordained from the Kingman church, Nave said he hopes he won't be the last.

"I think there is a lot more awareness of the vocation because I'm from here and I'm known in the community," Nave said. "The seeds have been planted, and we'll see what grows in the community."