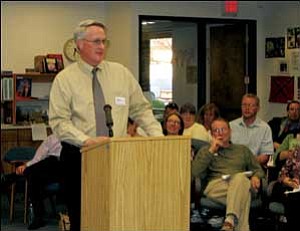 Mike Kearns, chancellor of Mohave Community College, addresses the Kingman Unified School District Governing Board on Tuesday night. He spoke about donating college land to the district upon which a new high school would be built. TERRY ORGAN/Miner

Members of the Kingman Unified School District Governing Board will consider a recommendation made at Tuesday night's monthly meeting to build a second high school on the Kingman campus of Mohave Community College.

Superintendent Maurice Flores said the committee making the recommendation was comprised of 20 people, only five or six of which are district staff members. The group met more than six times and traveled to Phoenix to look at four new high schools there and their various configurations.

"We have $2 million available for purchase of land. That money could go a long way, or not so long, depending on the site we choose."

Flores said college officials have indicated they are willing to give the district up to 80 acres of land. No engineering study has yet been done on the site.

An intergovernmental agreement would have to be reached between MCC and KUSD and that is months away, he added.

Member Terri McMullen asked who would own the donated property.

MCC Chancellor Mike Kearns addressed that point, saying the question of ownership would be resolved through a bonding process, something that has been done at other high schools that share land with their communities.

"The IGA is many months away and we haven't yet got all the details worked out, such as would the site have football or baseball fields," Kearns said. "We have a general idea of where things would go."

MCC presently utilizes 50-60 percent of available land on its Kingman campus, so ample space is available toward the back of the property to build a high school.

"There are only a few times when you can take a giant step for a school, community college and community," Kearns said. "The potential for this facility is second to none." Kearns also spoke of a dual admissions agreement signed earlier in the day with Northern Arizona University that will aid students seeking a bachelor's degree. MCC will send those students up to a higher level, while at the same time reaching down to county high schools to bring in new students to the community college.

MCC thus is in the "middle of the education pipeline," he said.

A workshop is to be held in the next two weeks when questions from board members will be addressed regarding the MCC site, along with possibly making the new facility a "pathways" high school.

Flores told members the administration is looking at small learning communities. Curriculum hasn't been decided, but vocational and health sciences are under consideration.

"We need to make it clear we want two separate high schools," Assistant Superintendent Betsy Parker said. "Both would have comprehensive programs to graduate students ready for college.

"A pathways school would enable graduates to gain certification for apprenticeship and journeyman positions."

Members also approved a second issuance of bonds from the $80 million amount approved by voters in November 2006. Last year, $10 million in bonds sold out in a matter of hours following the first issuance, and it is expected to be exhausted by this summer on renovations and improvements within the district.

"Oz (director of construction Enderby) has looked at projects whenever spending needs to occur under the Capital Improvement Plan," said Wanda Hubbard, KUSD director of finance. "I've looked at what makes the most sense, taking into account debt and bond service.

"Over the next two years, we feel $25 million is appropriate."

A spending recap sheet was given to board members. Some of the larger expenditures in the proposed $25 million issuance include $3.3 million for transportation and maintenance facilities, $1.9 million for a central warehouse and kitchen, $1.1 million for roofing of schools and another $1 million for heating and air conditioning system replacements. Those all fall within approved priority projects.

Proposed projects with large price tags include $1.2 million for electrical upgrades, $4.6 million for athletic fields and $2.4 million for land acquisition. In addition, the first $3 million of $24.7 million needed would be earmarked for construction of the new high school.

Board President Charles Lucero and Pat Carlin Jr. raised questions about the accuracy of the figures.

"If we're off by $6 million we'd be paying interest on money sitting in a bank account," Carlin said.

The amount for the second issuance was tabled, pending further research.