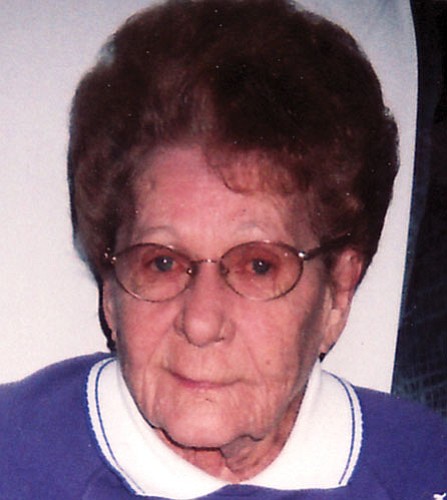 Kingman pioneer and rancher Nellie A. Blake passed away on Saturday, April 26, 2008. She was born in Pampa, Texas, on Aug. 7, 1918, the youngest child of Frank and Leona Meers. Nellie married W.R. "Bob" Blake and had two children, Jacque (Bill) Beatty and Bill (Debbie) Blake; six grandchildren and one great-grandchild.

After their marriage, Bob and Nellie bought a ranch in Concho, Ariz. There was a small cabin but no available electricity. Nellie used kerosene lamps and a wood stove to prepare meals for five people that included fresh bread and pies every morning before she joined the men to ride and work on the ranch. She went to town once a month for groceries and always tried to have 5-cents left for a bottle of soda to drink on the trip home.

When Bob returned from World War II in 1946, they moved to Mohave County and bought a ranch 15 miles southeast of Kingman. There was only a fence outlining the perimeter, so they slept in a small trailer and cooked in a nearby tent. Through the years, she worked alongside her husband building a home, fencing in pastures, creating roads and laying 90 miles of pipeline.

Power for the house was supplied from a generator, and at night, they had the choice of having light to read by or being able to listen to the radio while using the kerosene lamps. Telephones and television didn't arrive until the late 1950s. Their first telephone had a crack handle and their number was 19R2, which meant 2 rings on the party line.

Nellie became an avid golfer, joining the Kingman Ladies Golf Club and entering tournaments around the state. She was the first person to hit a hole-in-one on both the desert course and the newer grass course.

Nellie was active in community affairs and organizations such as the Mohave County Cowbells, the Republican Women and Soroptimist International. The advancement of Mohave Community College was of great interest to her and she served on the board for several years. She was proud of Kingman and was always interested in its growth and progress.

The family would like to thank all those who have shared their kindness with her as well as KRMC Hospice. We would especially like to thank Cathy Martinez for her loving care and dedication and Carol Brown for all she did.

Services will be held Friday, May 2, at Sutton Memorial Funeral Home with the viewing at 9 a.m. and the service at 10 a.m. Burial will be in Mountain View Cemetery followed by a celebration of her life at the Elks Club.