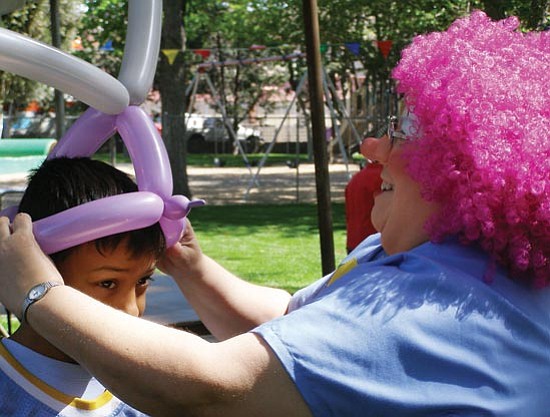 Courtesy<br><br> Silly Dilly the clown fits a balloon to a boyï¿½s head during the 2007 KABAM festival.

KINGMAN - Six authors will participate in the Fourth Annual Kingman Area Books Are Magic Festival slated for May 15-17.

"We pass a hat and those wishing to participate throw a dollar or two into the pot before they get up and read their poem," said Kathy McGehee, Mohave County Library District marketing specialist and KABAM coordinator.

"Audience members and judges decide the winner, who gets the money in the hat."

She received a master's degree in English in 1995 and a Poetry Fellowship from the Arizona Commission on the Arts in 2001.

She just published her first book of poems, "Game."

All KABAM events are free to the public.

An author's reception is slated for 6 to 8 p.m. Friday, May 16, in the Student Center on the Kingman campus of Mohave Community College.

"The authors will get together there and network, and the public is invited to come and meet them," McGehee said. A high school group will prepare food from the keynote speaker Cheryl Rogers-Barnett's "All-American Cowboy Grill Cookbook," according to McGehee.

Rogers-Barnett is the adopted daughter of cowboy stars Roy Rogers and Dale Evans. She co-wrote the book with Ken Beck and Jim Clark. It contains photos and grill recipes from "reel and real" cowboys, along with interesting facts about the old West.

Kingman resident JC Amberlyn, Scottsdale's Betty Webb, Matthew Henry Hall and Cynthia Kadohata are the other authors who will join Rogers-Barnett and Divine for the main event Saturday, May 17. It runs from 10 a.m. to 4 p.m. at Metcalfe Park in Downtown Kingman.

"Our authors will all speak and do readings for about 30 minutes," McGehee said. Hall is scheduled to play the guitar and sing folk songs at 1 p.m.

"We'll have children crafts of decorating book bags and the Kingman Concert Band will perform at 3."

Webb also will appear at 1 p.m. Friday, May 16 at the Mohave County district Library on Burbank Street. She will follow that with a book signing at 2:30 p.m. at Hastings.

Amberlyn, a photojournalist, has worked as a video game animator, illustrator and painter.

Her first book, "Drawing Wildlife," was published in March 2005 and reflects her passion for wildlife and art.

His first children's book, "Phoebe and Chub," was published in the spring of 2005.

Kadohata has written four children's novels. "Cracker: The Best Dog in Vietnam" is her newest book and winner of a Newbery award.

The New York Times has called her a luminous new voice in fiction with the publication of her first novel, "The Floating World."

Webb is the author of the Lena Jones mystery series.

She conducted extensive research of the polygamist lifestyle on the Arizona Strip for "Desert Wives."

Vendor booths will be open throughout the day. Roving clowns, characters and activities will close during scheduled presentations.